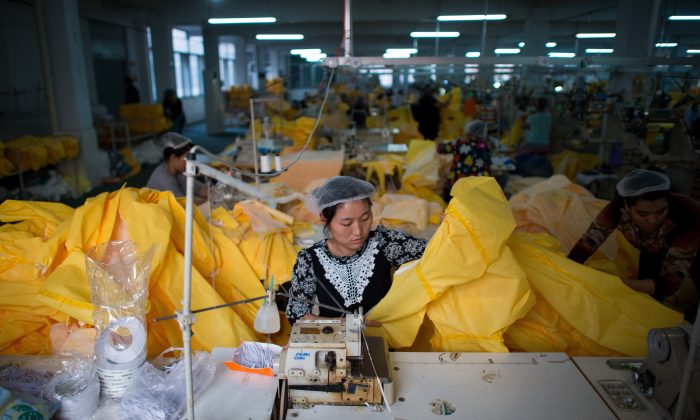 In this file photo, women working is working in Anqiu factory, some 500 kilometers south of Bejing. (Johannes Eisele/AFP/Getty Images)
Business

Consensus sentiment toward the Chinese economy is hard to pin down. Just a few years ago it was along the lines of “China is invincible.” Recently, this invincibility has gotten some scratches in its armor.

For example, people have recently been observing that the Chinese labor force is shrinking and additionally labor isn’t adding much to GDP growth. According to official figures, there is nothing to worry about though. The unemployment rate has been stable at 4.1 percent for the last three years.

However, Keyu Jin of the London School of Economics now says the Chinese economy is not creating enough jobs.

“Even amid double-digit GDP growth, employment grew at a measly 1.8 percent average annual rate from 1978 to 2004. Households, it seems, have largely missed out on the benefits of economic development in China,” Jin wrote in a post on the World Economic Forum website.

Who Is Lewis and What Does His Turning Point Have to Do With China?
Urbanization May Offer False Economic Hope for China

He said while the Chinese economy was growing, jobs were simply transferred from the inefficient state sector to the more efficient private sector, thus generating growth but not employment. In addition, most growth was created in the capital intensive yet increasingly automated manufacturing sector of the economy.

Another problem, according to Jin, was the focus of state resources (capital and political support) on public industry, while private firms create more jobs.

“With average employment growth of 10.4% per year, the formal private sector partly compensated for the SOE [State Owned Enterprise] layoffs from 1995 to 2004. The informal sector grew even faster, at an annual rate of 24%, albeit from a low base,” he wrote.

So if the Chinese want more jobs, they should focus on private companies and services, which is largely how Western economies are structured.

On the one hand Kin is certainly right China needs more jobs. There are millions of so-called ants and rats people. They are described in an earlier Epoch Times article, living under horrible conditions in the big cities in cellars or underground raid shelters because they can’t find proper jobs.

On the other hand, with the labor force shrinking, China just needs to become more efficient and boost its output per worker so that fewer workers produce more for everyone.