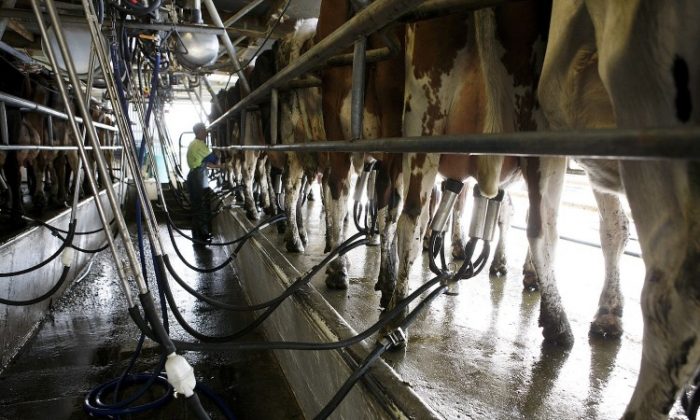 HAMILTON, New Zealand—In a country where dairy production has been perfected using cutting edge technology, and milk products account for 25 percent of the country’s total export earnings, there is only one problem: each year New Zealand produces only 100 new agricultural graduates.

The public focus on agriculture’s perceived detrimental impact on the environment has deterred some people from going into farming, thinking that they won’t be viewed in a good light, says Rowarth.

Anneke Bootsma and her husband run an almost 500-acre farm with 500 cows in Tapanui, West Otago, about 90 miles west of Dunedin. She says finding staff who are passionate about dairying and producing high quality milk in an environmentally sound way is her biggest headache.

Without workers from overseas, the work would just not get done, says Bootsma, who employs two Filipinos. She has had very little interest from ads placed in New Zealand.

Outsiders do not realize how demanding farm work is, says Bootsma, who recounts that New Zealand Immigration has now told them that they have to concentrate on finding workers nationally.

“So you don’t want people there that use drugs, that drink, that don’t sleep enough, that have all sorts of problems because in the end, if there are accidents,” she says, the farmer is accountable.

The Bootsmas are also passionate about caring for the environment.

With more cows per acre and higher inputs, environmental challenges have become greater. Most dairy farmers now realize that effluent is no longer a waste product and can be used to fertilize pastures rather than being allowed to disappear into waterways, says Bootsma.

“We aim to leave the environment in a better shape than what it was before. It’s not ours. We are using it for a little bit and there will be another generation that will use it for a bit,” she says.

President of the Waikato Federated Farmers, an independent advocacy organization, James Houghton believes that New Zealand’s sharemilking system has been instrumental in attracting young entrepreneurs who have brought vibrancy and innovation into farming.

But he fears that the transition to corporate farming could change that.

“Landcorp used to be a pathway through to land ownership within Landcorp … you start on wages and then move to a farm manager’s job, and then go to sharemilking on some of their other farms. It was a career pathway for a lot of people.”

State-owned agribusiness Landcorp, one of New Zealand’s largest farming organizations, has 52 dairy units milking approximately 35,000 cows over 32,000 acres that are scattered throughout the North and South Islands.

But sharemilking is no longer a part of Landcorp’s management structure, says Houghton, who believes that the farming industry will stagnate without it.

Professor Rowarth agrees that sharemilking has a big place. “The farmer-owner is really important because they’re the ones that … put in the long hours and development, and think: ‘This is mine and it’s going to be better when I leave it than it was when I took it on.'”