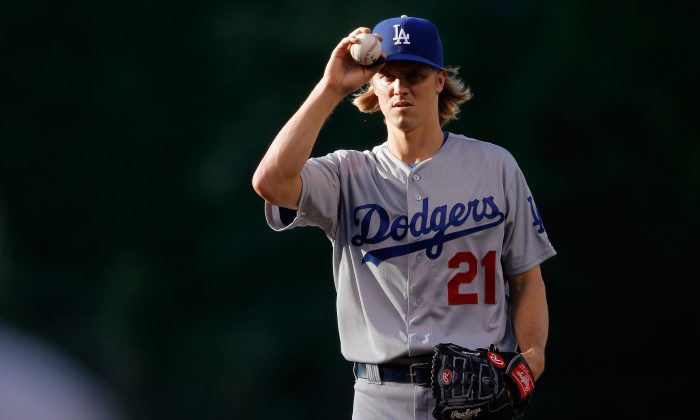 Zack Greinke's ERA has not been above 2.00 after any start this season. (Doug Pensinger/Getty Images)
Baseball

Too Close to Call: Breaking Down the 3-Man Race for the NL’s Cy Young Award

In the process, Kershaw upped his chances of winning his third straight Cy Young award—and fourth overall. But with one start left, he’s not quite the front-runner for the award this time around.

That’s because the Dodgers other ace, Zack Greinke, put himself in the early discussion for his second Cy Young with a mid-season scoreless inning streak of 45 2/3 innings that lowered his ERA to a microscopic 1.30 back in mid-July.

Two months later, Greinke’s ERA still tops the majors at 1.68; and even more impressively, it hasn’t been above 2.00 after any start this season. Besides that, Greinke has an 18–3 record (highest winning percentage in the league), the best WHIP (walks/hits per inning) of 0.852, and his 192 strikeouts are nothing to sneeze at.

Besides Kershaw, Greinke has his work cut out for him with the Cubs’ Jake Arrieta. Arrieta isn’t known nationally like Greinke or Kershaw. The 29-year-old has yet to make an All-Star team, and only last year (10–5, 2.53 ERA) did he start to excel.

This year started innocently enough with a 10–5 record at the break, to go along with a stellar 2.66 ERA. Since then, he’s been lights out.

Arrieta has gone 11–1 with a 0.80 ERA in 14 starts since the midsummer classic and has helped turn the lovable Cubs into World Series contenders.

His 21–6 overall record gives him the most wins in the majors, while his 1.82 ERA on the season is starting to challenge Greinke for the best in the majors—something thought impossible for anyone to do two months ago. In addition, his 229 strikeouts are a career high and represent the seventh-best total in baseball, while his 8.3 WAR trails only Greinke.

While Kershaw’s run as four-time defending ERA champion is probably over, 2.16—third-best in the majors—isn’t shabby.

His 16–7 record trails Arrieta and Greinke as well, as does his 7.1 WAR, but Kershaw still makes more hitters swing-and-miss than anyone else. His 294 strikeouts are tops in baseball, and his 11.555 strikeouts-per-nine-innings is best in the NL.

In addition, he made headlines with his own 37 consecutive scoreless innings streak, which ended in early August and put him back in the discussion for another Cy Young.