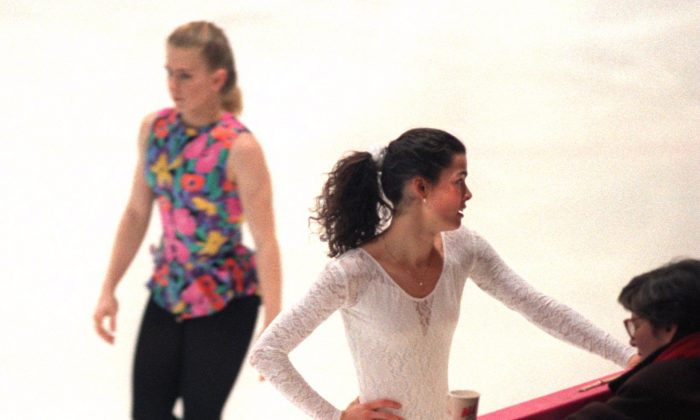 Tonya Harding walks by as Nancy Kerrigan of the USA takes a break during practice in Lillehammer, Norway. (Pascal rondeau/Allsport)
Crime and Incidents

A former state official said in a new interview that Tonya Harding “was involved up to her neck right from day one” in the attack on ice skating rival Nancy Kerrigan.

Kerrigan was hit in the knee by an attacker with a police baton just seven weeks before the 1994 Winter Olympics.

The man was later identified as Shane Stant.

The plot was pinpointed as being set up by Jeff Gillooly, Harding’s ex-husband, along with two other men, Brian Griffith and Derrick Smith.

Gillooly and Griffith pleaded guilty to racketeering in connection with the attack and Gillooly served two years in prison, as well as paying a $100,000 fine.

But Harding was never implicated directly and she has claimed she wasn’t involved at all, despite her ex-husband claiming that Harding called for the attack.

She “was involved up to her neck right from day one,” he told People magazine.

Frink headed up the investigation against Harding.

“The only reason she didn’t go to prison with the other people, although the quality of evidence was good, it wasn’t as good as the other people,” Frink said, referring to the four men. “We made a decision, as you do often in criminal cases when you don’t have iron-clad evidence, we made a compromise.”

According to FBI documents, Harding told her husband at one point, “Okay, let’s do it.”

A note which appeared to be handwritten by Harding was also produced by her ex-husband. The note outlined the address of where Kerrigan trained in Massachusetts, although that attack didn’t go through so the attack had to be re-planned for Michigan.

While Harding didn’t receive any criminal punishment such as jail time, she was banned from figure skating for life.

“She could have gone to prison instead if she wanted to. This is what she wanted to do at the time,” Frink said. “We would have gladly accepted an alternative sentence where she got the same as everyone else. There’s no point in her whining about the choices she made back then now.”

Harding admitted publicly for the first time that she had knowledge of the attack just recently when she told ABC that she “knew something was up” prior to the attack with tears in her eyes.