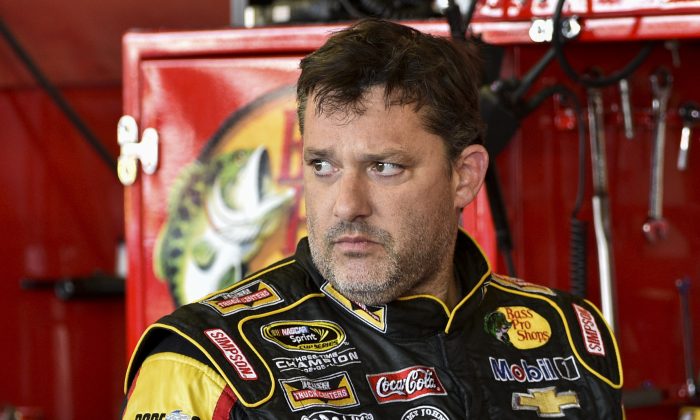 An article saying NASCAR driver Tony Stewart will retire from racing is nothing more than a hoax. In this Friday, Aug. 8, 2014 photograph, Tony Stewart stands in the garage area after a practice session for Sunday's NASCAR Sprint Cup Series auto race at Watkins Glen International, in Watkins Glen N.Y. Stewart struck and killed Kevin Ward Jr., 20, a sprint car driver who had climbed from his car and was on the track trying to confront Stewart during a race at Canandaigua Motorsports Park in upstate New York on Saturday night. Ontario County Sheriff Philip Povero said his department's investigation is not criminal and that Stewart was "fully cooperative" and appeared "very upset" over what had happened. (AP Photo/Derik Hamilton)
Social Media

An article saying NASCAR driver Tony Stewart will retire from racing is nothing more than a hoax.

The bogus report was posted on Empire News, which describes itself as satirical in nature.

“NASCAR Insiders Rusty Wallace and Darrell Waltrip have informed the Associated Press that three-time Sprint Cup Champion Tony Stewart will hold a press conference in the coming days, and is expected to announce his retirement from all auto racing activities, as well as announcing the sale of his half of his ownership of Stewart-Haas Racing. The announcement comes after Stewart tragically struck and killed fellow sprint car driver Kevin Ward, Jr.,” the bogus report says.

According to a disclaimer, Empire News doesn’t post real stories and shouldn’t be taken seriously.

“Empire News is a satirical and entertainment website. We only use invented names in all our stories, except in cases when public figures are being satirized. Any other use of real names is accidental and coincidental,” it says.

A number of users on social media sites like Facebook apparently believed the article. It had tens of thousands of “likes” and shares on Facebook as of Thursday night.

“If this happens, I will be done with Nascar. I was a Big Earnhardt Sr fan and when he died I started following Tony. Nascar was never the same without Sr. and will not be the same without Tony. I love Tony with all my heart and pray that he is somehow able to be at peace with himself some day. This was a terrible accident and was NOT Tonys fault. Tony would Never hurt anyone,” one person wrote on Facebook.

Added another: “Dam!! This is just wrong. Again, I am sorry, so sorry for the Ward family’s loss. I couldn’t imagine. I understand that want someone to blame, they are grieving – but so is Tony Stewart. He has to live with this, no matter what. Kevin Ward should not of gotten out of the car. In a moment of anger, emotions, he didn’t think.”