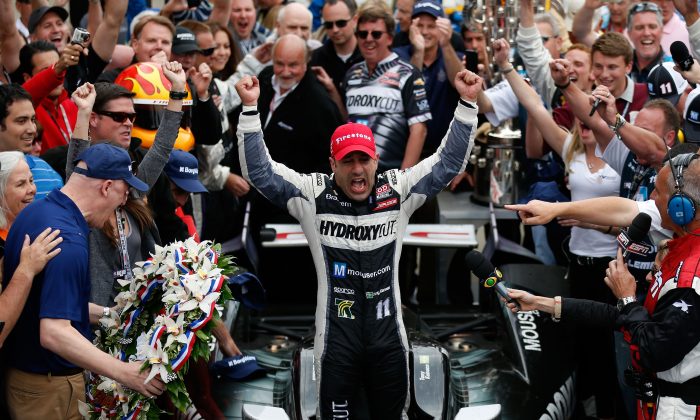 After 11 unsuccessful attempts, Tony Kanaan has finally won the most important INDYCAR race, in fact the only INDYCAR race that impinges on the nation’s awareness—along with the 24 Hours of Le Mans and the Monaco Grand Prix, one of the Big Three races known around the world as important events. In short, the only race that really matters to open-wheel racers in America.

For Kanaan, all his race wins, even his series championship, were unimportant compared to winning “The Greatest Spectacle in Racing.”

Kanaan’s 12th try proved lucky. After running up front all day, the 38-year-old Brazilian native passed 2012 series champ Ryan Hunter-Reay on a restart two laps from the end of the 2013 Indianapolis 500, a few seconds before 2012 Indy 500 winner Dario Franchitti lost control and smacked the wall, bringing out the race’s fifth yellow flag.

The race finished under caution and Kanaan became the latest driver to have his likeness added to the Borg Warner Trophy.

“This is it, man. I made it,” Kanaan told ABC Sports. “Finally I am going to put my ugly face on that trophy.”

Kanaan was known for racing well at Indy and getting hit by bad luck—oil on the track, an unfortunate strategy call before a rainstorm, crashing avoiding other drivers, and even suspension components breaking and sending him into the wall. Despite a couple of poles and a trio of podium finishes, he had never had the right combination of a fast car, a good plan, and a safe ride to get him to Victory Lane.

Persistence, mixed with talent and experience of Kanaan and the team KV Racing has built around him in the past three years at last paid off for the Brazil-born Lebanese driver. Kanaan, one of the best-liked drivers in the paddock, has finally been rewarded with the win he so badly wanted.

“We were known for not winning and now we are for winning. I don’t know what to say,” was all the overwhelmed Kanaan could offer as explanation.

“The last lap was the longest of my lap I wanted the pace car to hurry up so bad, but I’ve enjoyed it. I did it.”

Luck was with Kanaan on this day—in the form of a good-luck medallion he had given away nine years before.

Kanaan visited 15-year-old fan Andrea Brown on the eve of her emergency surgery for a brain aneurysm, and gave her the medallion, telling her it would bring her good luck. Apparently it worked; the surgery was successful.

Nine years later, two days before the 2013 Indy 500, Brown, now 24, sent the medal back to Kanaan with a note saying, “Here’s your good luck charm back. Now you take it and win the Indianapolis 500.”

Kanaan started his INDYCAR career in 1998, driving for Tasman Motorsports, Forsythe Racing, and Mo Nunn Racing in the Champ Car World Series. The INDYCAR series was divided then, so not until 2002 did Kanaan get a chance to drive at Indianapolis, when Mo Nunn joined the Indy Racing League, which controlled the track.

Kanaan led 23 laps in the 2002 Indy 500 before spinning in some oil. He started second the following year, but finished eighth.

In 2004 he joined Andretti Autosport—then called Andretti-Green—and won the series championship, but at Indy he finished second, despite leading 28 laps.

He won his first Indy500 pole in 2005, but finished eighth again. He led laps the next three years, setting a record for leading seven consecutive Indy 500s, but incidents with other drivers—none his fault—kept him from success.

Kanaan had been sponsored by the 7-Eleven convenience store chain while at Andretti Autosport. When the firm stopped its sponsorship after 2010, Kanaan was let go, eventually ending up at the small, underfunded KV Racing team.

Kanaan’s experience helped KV’s other drivers, and showed that the team had potential, finishing fourth in 2011 and third in 2012.

In those 11 years, Kanaan had led the race eight times, won the pole twice, scored five top-five finishes, and finished on the podium three times, but at Indy, only the winner is remembered.

Now, with his face embossed on the trophy and his name printed in the record books, it is certain: Kanaan will be remembered.