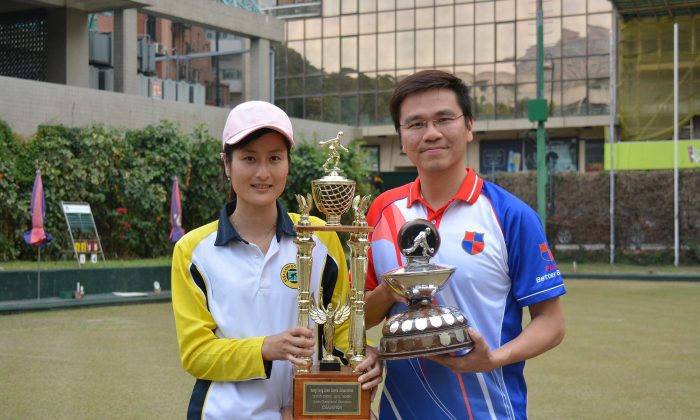 HONG KONG—For the fifth year in a row, champions of both gender at the National Champion of Champions singles were new winners of the competition.

Hong Kong International Tony Cheung, who qualified for the competition as the Singles champion at Kowloon Bowling Green Club, added the title to the National Triples he won earlier this year to round off a successful year for him.

Cheung faced the reigning National Singles champion Chadwick Chen in the final, which was played at KBGC last Sunday, March 5. Cheung progressed through the double round-robin group stage and a semi-finals victory against Warren Cheung of Hong Kong Football Club to the final.

The final was tight and filled with fine drawing and precision strikes. It started with a dead end in the first end when Chen drove the jack out of the boundary with his last bowl. From then on there were ups and downs for both players and the score was tied at 9-9 and 10-10 mid-way through.

Cheung believed the critical point was on end 15 when he was leading 12-13, “Chen was lying shot and if he got it, the score would be tied on the board and it would put myself in a difficult position. I stayed focused and drew close for the shot bowl. He tried to take it out but missed. I took the shot, opened up the margin a bit and hung on to win the game.

Cheung was delighted to win the title, “The green was fast today but it was nice to play on. I think both of us managed it quite well and that’s why we tried a lot of different shots. I just kept my composure and stayed focused to maintain my consistency in drawing. It worked out fine and I am glad to lift this trophy.”

In the women section, rookie Cheryl Chan from Shatin Sports Association celebrated her birthday with the first major trophy she had won in her short bowling career.

Full time housewife Chan started bowling at The Association of HK Yunnan Fellow Provincials four years ago, and then moved on to represent Shatin Sports Association.

She played Amy Chwang from Kowloon Bowling Green Club in the final. The game was tight when both sides displayed highly delicate drawing power. Initially Chwang had the upper hand but Chan managed to win six out of seven ends from the 7th end onward and opened up a lead of 11-15. Chwang pulled one back in the following end but Chan score two to finish the game.

Chan was jubilant about her achievement, “I started lawn bowls because there was a lawn bowls green close to where I live. I found it very interesting after joining a training course and started playing it regularly. Today I think I played well and the key is that I stayed calm throughout and that’s important when you play an experienced bowler like Amy.

“The green was fast with a true bias which allowed me to concentrate on my drawing.  With such, I performed to my usual standard and won my most precious award in lawn bowls so far,” said a happy Chan.

For Chwang this is her second Singles finals she lost this year, after conceded the National Knockout Singles to Queenie Lai of Seabird Sports Club last December.

Participation to the CoC is restricted to the current holders of the singles champions of the Hong Kong Lawn Bowls Association (National Singles, Knockout Singles, Under 25 Singles, Champion of Champions singles) as well as the singles champions of all member clubs under the Association. The format of the competition is a double round-robin followed by the knock-out stage from semi-finals onward.

On March 11-12 there will be a Tiger Bowls competition at all greens in Hong Kong,  and the Aitkenhead Fours Competition will be played at Victoria Park, Tseung Kwan O and Tuen Mun. On March 12 only, the Youth Novice Competition will take place at the Ap Lei Chau Indoor Greens. All events will run over the same time period from 9am until 6pm.