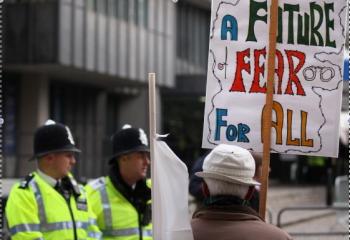 Tony Blair gave evidence on the Iraq War for the second time to Sir John Chilcot and the Iraq Inquiry on January 21, 2011. Protesters demonstrated outside the venue of the Queen Elizabeth II Conference Centre. (Oli Scarff/Getty Images)
US

Simon Veazey
Freelance Reporter
Simon Veazey is a UK-based journalist who has reported for The Epoch Times since 2006 on various beats, from in-depth coverage of British and European politics to web-based writing on breaking news.
View profile
Follow
biggersmaller
Print
Tony Blair faced the official inquiry into the Iraq war for the second time on Friday, January 21st. Fended off suggestions that he had given George Bush a “blank cheque” to go ahead with the invasion, he offered an apology for the lives lost in the war.

The Iraq Inquiry is the fourth official inquiry into the war and had recalled Mr Blair to clarify "inconsistencies" between his evidence and that given by other officials.

The former prime minister, looking tanned from the Middle East where he works as a peace envoy, soon settled into the same themes as during his first evidence session at the inquiry a year ago, framing the decision to go to war in the context of a post-911 world where the assessment of risk from the regime had changed.

Tony Blair once again echoed his warnings over Iran, saying that he “passionately” believed the West had to stop it’s “wretched posture of apology" over the Iraq war, and face up to the real nature of the regime.

Mr Blair focused more in this session on the political challenges he faced, painting himself as a lynchpin figure brokering a way forward between the hard-line US stance and an overcautious UN dragged back by Jacques Chirac, at the same time as juggling political challenges at home.

Mr Blair said that there were two standpoints for handling the Iraq threat, one represented by him, the other by Jacques Chirac.

“One view is this extremism it is an encrustment on an otherwise manageable situation. Don't over-worry about it. Don't provoke it. Don't stimulate it. Just manage the situation,” Mr Blair said.

“The other view, which is my view, is that this thing is deep. Its potential to wreak enormous and devastating damage is huge and we have to confront it.”

Mr Blair denied that he had given George Bush an unconditional agreement to invade Iraq, but did not shy away from saying that he had always said Britain would stand “shoulder to shoulder with the US".

He said that had he not been given the legal go-ahead – which was not granted until just before the invasion – he would have had to withdraw from the invasion plans drawn up with the United States.

The Iraq Inquiry, known as the Chilcott Inquiry after its chairman Sir John Chilcott, was set up to establish what lessons could be learned from the invasion. The use of historians instead of lawyers in the inquiry panel has been criticised for a perceived failure to grapple with the legal questions, and with the likes of Tony Blair and Jack Straw – themselves trained lawyers tempered by years of political debates. Despite several high-profile evidence sessions, the inquiry, however, is predominantly focused on analysing the documentary evidence.

At his first evidence session to the inquiry last year, Mr Blair was asked whether he had any regrets. His answer “no” drew angry shouts from the audience and made headlines around the world the next day.

He sought to clarify this at the end of his session last week, explaining that he had taken the question to mean did he have any regrets specifically about the decision to go to war, but that he did regret “deeply and profoundly” the loss of life.

“Too late!” shouted a woman from the audience, before she walked out of the hearing, as others shouted out before being silenced by Sir John Chilcott.