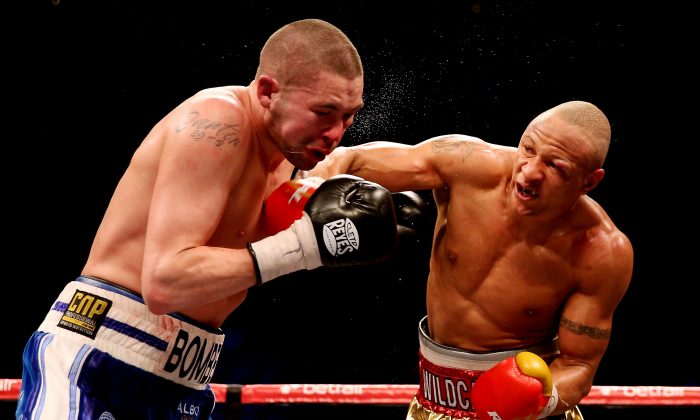 Tony Bellew of England (L) is caught by Isaac Chilemba of Malawi during their WBC Silver Light Heavyweight Championship and World Final Eliminator bout at the O2 Arena on May 25, 2013 in London, England. Bellow lost. (Scott Heavey/Getty Images)
Sports

The fights are taking place at Echo Arena in Liverpool, England on March 15.

They’ll be broadcast on Sky Sports 2.

They’ll be live streamed on Sky1.

Valery Brudov (41-4, 28 KO) is experienced at 37 years old, and is considered the probable loswer in this fight.

If Bellow does lose, he has said that he will quit, he told Sky Sports.

“It’s the be all or end all,” said Bellew. “It’s that big, if I can’t beat Valery Brudov then I’m not going to be a world champion and I just don’t think there’s much point in carrying on to be totally honest, so this is it for me.

“He’s tried, tested and proven, he’s solid, and the look in his eye says he’s coming to win, he’s not coming here for a pay day, to make up the numbers, and he is coming to win.

“He just said to me ‘God bless you’, I think he’s trying to tell me I’m going to need it.”