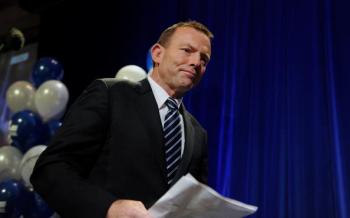 The Opposition leader was praised by a crowd chanting his name as he entered the ballroom at Sydney's Four Seasons Hotel shortly before midnight, August 21, according to the Daily Telegraph.

Mr Abbott attempted to calm the crowd warning against "premature triumphalism" and urging measured reflection of the magnitude of the task ahead.

He agreed the caretaker provisions of the Labour Government should continue but said the result clearly showed "the Coalition is back in business," wrote the Herald Sun.

"What is clear from tonight is that the Labor Party has definitely lost its majority," he said as the crowd exploded. "And what that means is that the government has lost its legitimacy."

Mr Abbott said a government which found it had to govern effectively with 17 seats would never govern properly as a minority government.

"It's pretty clear that the Australian people have responded to the clear policies we took to the election," he said.

Mr Abbott told the crowd he loved its enthusiasm. "But I have to say to you I feel humbled by the responsibilities that I feel could lie ahead," he said.

Mr Abbott also paid tribute to Prime Minister Julia Gillard. "The last eight weeks could not have been easy for her but she has certainly worked hard for her cause."