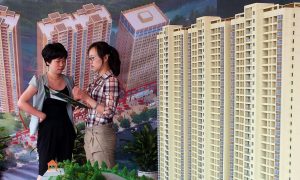 A photograph on Sina News, a Chinese website, shows people in the city of Xuzhou, Jiangsu Province, scrambling to salvage the boxes of substandard and counterfeit foodstuffs being destroyed and discarded by local authorities on March 11. Some came back for several helpings. (Screenshot/Epoch Times)
China

The level of counterfeiting in China is widely known—it’s enormous. In a recent episode in eastern China, authorities tried to destroy over 30 tonnes of substandard and fake products, but found they were overwhelmed by a grasping public, who came to collect their own haul before it could be destroyed.

This took place on March 11, when the municipal government in Xuzhou city, one of the largest cities in the prosperous Jiangsu Province on China’s coast, announced that it had accumulated 35.7 tonnes of counterfeit products worth over 285,000 yuan (about $45,487)—and would soon set about destroying them.

Local officials said they selected the best from these poor-quality goods, removed their labels, and donated them to socially vulnerable groups and poor students, according to People’s Net, the state-run website under the Party mouthpiece People’s Daily.

When local authorities actually attempted to destroy the remainder, though, locals arrived en masse, grasping for what they could and carrying the food away in their bamboo baskets and cloth bags.

The local police tried to stop them, reports said, but were evidently outnumbered, given that some locals reported making multiple trips to top up their haul.

One local woman, after returning home with boxes of fake salt flavor enhancers (monosodium glutamate or MSG), came back to the site and said she knew little about the danger of using counterfeit products, according to People’s Net.

“I’ll use it to feed the pigs if I can’t use it for cooking,” said the woman, when asked what she would do with the fake MSG.

Australians are a little more sensitive to sub par Chinese goods: on March 12, Australian media reported on oranges from China that had been dipped in toxic dye to change their color. They were quickly taken off shelves as the media storm developed, especially after the recent news of frozen berries that led to a raft of hepatitis A cases across Australia.

Apple’s iWatch was another favourite for rapid counterfeiting in China. Internet users lamented the fact that most of them would never be able to afford a real iWatch—and that government officials would surely be able to afford the $10,000 to $17,000 models, made with 18-karat gold—and may have to settle for the fake versions.

“Yes, I can have an iWatch without selling one of my kidneys,” joked one Internet user.