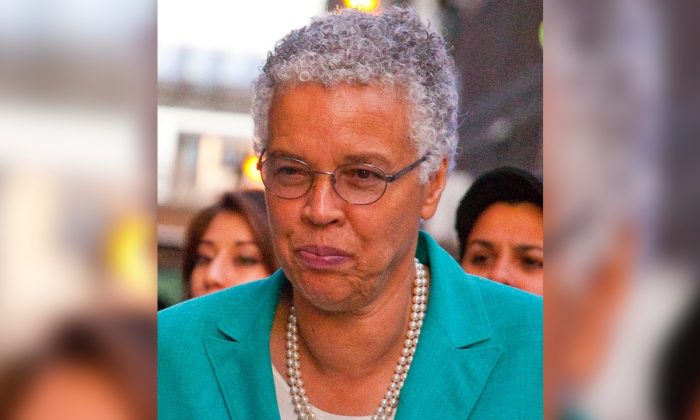 On Feb. 26, former federal prosecutor Lori Lightfoot and Cook County Board President Toni Preckwinkle won the top two spots in Chicago’s mayoral primary. After beating 12 other candidates, Lightfoot, who received 97,000 votes (17.5 percent of the total), and Preckwinkle, who received almost 89,000 votes (16 percent), will compete in a runoff election on April 2.

If Preckwinkle wins, Chicago will elect its most left-wing mayor since Harold Washington (1983–1987).

Preckwinkle was part of Washington’s team when he won the office with a coalition led by white socialists and communists, black radicals, and Latino activists. Washington’s coalition was the model for Jesse Jackson’s multi-racial Rainbow Coalition, which earned the Chicagoan 7 million votes and fourth place in the Democratic presidential primary in 1988. It also foreshadowed the left-led multi-racial coalition that elected Barack Obama to the U.S. presidency in 2008 and 2012.

Preckwinkle has long moved in the overlapping circles of the Obama camp and Chicago’s socialist and communist left.

In the mid-1990s, Preckwinkle was listed as a member of Friends of Alice Palmer, alongside future Rep. Danny Davis (D-Ill.), Jesus “Chuy” Garcia, Timuel Black, and Obama. Palmer, then an Illinois state senator, would later lose her seat to her own staff member, Obama—his first elected office. Palmer was active in the Communist Party USA-controlled U.S. Peace Council. She was also a regular visitor to the former Soviet Union and active in two international communist front groups: the World Peace Council and the International Organization of Journalists.

Davis and Garcia both had long histories with the Communist Party USA (CPUSA), and Davis was also a member of Democratic Socialists of America (DSA) in the mid-2000s. Black was a veteran of the Socialist Party, DSA, and the CPUSA spin-off Committees of Correspondence.

A Chicago seminar, “The Progressive Potential of Chicago City Politics,” was held Dec. 8, 1998, at the University of Chicago. The panelists included Jackie Grimshaw of the DSA-run Alinsky school Midwest Academy, far-left Chicago Alderman Helen Shiller, and Alderman Preckwinkle. The event was sponsored by the University of Chicago DSA Youth Section and the Hispanic Association for Cultural Expression and Recognition.

Preckwinkle has been an Obama loyalist since at least Obama’s successful state Senate campaign in 1996. In 2000, she backed Obama in a disastrous congressional campaign against former Black Panther Bobby Rush. In 2004, Preckwinkle supported Obama during his longshot, but ultimately successful, run for the U.S. Senate.

Obama and Preckwinkle met at another socialist setting in March 1998: the memorial service for Chicago DSA stalwart Saul Mendelson at the First Unitarian Church, Chicago.

Move forward 21 years and the socialists still support Preckwinkle. Illinois Rep. Jan Schakowsky, a one-time DSA member, endorsed Preckwinkle early on, describing her as “the progressive in this race.”

Serving Chicago Alderman and DSA comrade Carlos Ramirez-Rosa also has endorsed Preckwinkle because of her “bold plan to support, integrate, and provide equity to LGBTQ Chicagoans.”

If Preckwinkle wins in April, she won’t be alone. Besides Ramirez-Rosa, DSA member Daniel La Spata won a council seat outright in the Feb. 26 primary, and three more comrades—Rosanna Rodríguez-Sánchez, Byron Sigcho-Lopez, and Andre Vazquez—will advance to run-offs in April. Already there is talk of forming a DSA caucus on the Chicago City Council.

Chicago DSA co-chair Lucie Macias told the Chicago Sun-Times: “For the third biggest city in the country to have a DSA caucus is amazing, and having members around Carlos will only amplify the causes that working-class Chicago—not the rich—wants.”

If Preckwinkle wins the mayoralty and three more DSA comrades win council seats in April, the Windy City better brace itself for a major lurch to the left.