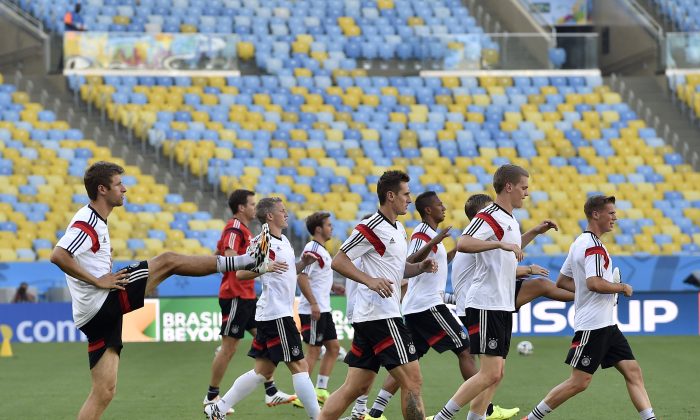 He scored two goals in a row against Brazil.

BELO HORIZONTE, Brazil (AP) — The Brazil squad entered the field carrying Neymar’s No. 10 shirt ahead of Tuesday’s semifinal against Germany.

Captain David Luiz held the jersey high above his head just before the Brazilian national anthem was played at the Mineirao Stadium. Then he and goalkeeper Julio Cesar held it together in front of their bodies as the anthem was played.

Neymar is out of the World Cup because of a fractured vertebra sustained late in Brazil’s 2-1 win over Colombia in the quarterfinals.

Neymar was replaced by 21-year-old Bernard in the starting lineup.

The star striker posted a message before the match supporting his teammates, saying he wants to be with them at Sunday’s final.

BELO HORIZONTE, Brazil (AP) — With Neymar out injured, Bernard will start as a third forward for Brazil on Tuesday in the World Cup semifinal against Germany.

Neymar will miss the rest of the World Cup after fracturing a vertebra in his back in the quarterfinal win over Colombia.

Maicon will also start against Germany, replacing Dani Alves for the second match in a row. Central defender Dante will play for Thiago Silva, the Brazil captain who is suspended.

The Germany lineup is unchanged from the quarterfinal win over France, with Miroslav Klose leading the attack and Philipp Lahm still at right back.