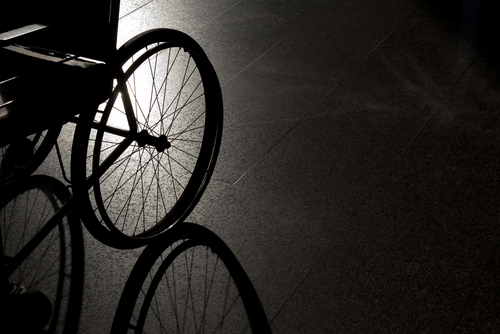 A file photo of a wheelchair. A wheelchair that can be controlled using only the tongue has been developed and is being upgraded for commercial sale. (Shutterstock*)
Tech

Tongue-Controlled Wheelchair in the Works

A team led by Maysam Ghovanloo at the Georgia Institute of Technology has invented a wheelchair that can be maneuvered using just the tongue.

Quadriplegics unable to use their hands to move the wheelchair and other patients suffering from multiple physical disorders including paralysis previously used wheelchairs that were equipped with eye or voice detection, sip and puff systems and other tracking methods.

These other methods are often unreliable, because some of these patients also suffer from weak voices or respiratory problems, for example.

The Tongue Drive System (TDS) uses custom-made piercings that are fitted with a magnet. A headset enabled with sensors tracks the tongue movements and sends signals to a smartphone, which commands the wheelchair to make the necessary adjustments.

The wheelchair has been tested by 11 patients with tetraplegia and all of them could reportedly maneuver their wheelchairs more comfortably. The institute also reports that the system works three times faster than the sip and puff systems.

It is designed to be multifunctional as users will be able to dial numbers, play games, and use the movement mechanisms as a cursor on computer screens and more. The system can also be put into a standby mode while talking, eating, or swallowing. To avoid using headsets, the team is also researching a new device that would fit entirely in the mouth.

The product is not yet on the market, but is in the process of being upgraded for commercialization.

Elliot Roth, chair of physical medicine and rehabilitation at the Northwestern University Feinberg School of Medicine said, according to a Georgia Tech news report: “The opportunity to use this high-tech innovation to improve the quality of life among people with mobility limitations is very exciting.”

*Image of a wheelchair via Shutterstock