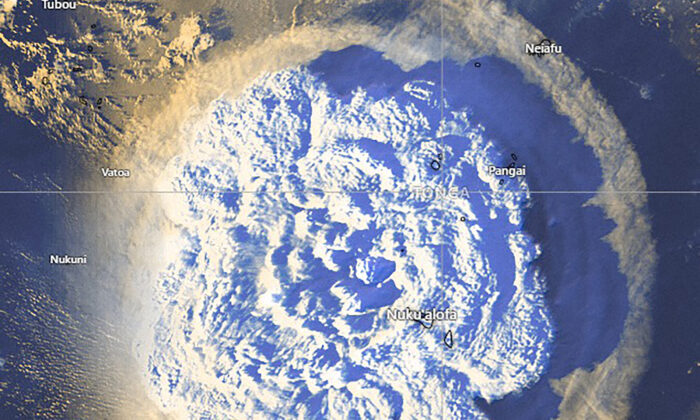 A satellite image of the underwater volcanic eruption in Tonga reaching into the stratosphere on Jan. 15, 2022. (AAP Image/Tonga Meteorological Services, Government of Tonga)
Science News

The Tonga volcanic eruption in January was the largest atmospheric explosion documented since the 1883 Krakatoa eruption in Indonesia, according to scientists.

Tonga was hit by an underwater eruption of the Hunga Tonga-Hunga-Ha’apai volcano and subsequent tsunami on Jan. 15, which wiped out an entire village on one of Tonga’s small outer islands and killed at least three people.

Robin Matoza, an associate professor at the University of California–Santa Barbara, led 76 scientists in a study on the volcanic eruption in Tonga, which was published on May 12 in Science Journals.

The study described the volcanic eruption as an “unusually energetic explosion” that generated “a broad range of atmospheric waves observed globally by various ground-based and spaceborne instrumentation networks.”

Scientists observed that the low-frequency atmospheric pressure waves, known as Lamb waves, had circled the Earth at least four times in one direction and three times in the opposite direction over six days following the eruption.

“Lamb wave peak-to-peak pressure amplitudes as a function of distance indicate that the atmospheric pressure pulse generated by the Hunga event is comparable to that of the 1883 Krakatau eruption,” they stated.

The Tonga volcanic eruption generated ionospheric perturbations and long-range audible sound that could be heard 10,000 kilometers (6,200 miles) away in Alaska, where a sequence of booms could be heard.

“Atmospheric waves from the main Hunga eruption had far more extensive impacts. Unusual sea-level changes or tsunamis were observed in the Pacific earlier than predicted, and in the Caribbean and Mediterranean without direct ocean routes,” the research reads.

Meanwhile, data from NASA’s Ionospheric Connection Explorer mission and the European Space Agency’s Swarm satellites suggest that the eruption generated “hurricane-speed winds” and “unusual electric currents” in the ionosphere hours after it happened.

NASA stated on May 10 that the volcano eruption sent “a giant plume of gases, water vapor, and dust into the sky,” causing large pressure disturbances in the atmosphere that led to the formation of strong winds.

A group of scientists led by Brian Harding, a physicist at the University of California–Berkeley, revealed the findings in a study published in Geophysical Research Letters.

“The volcano created one of the largest disturbances in space we’ve seen in the modern era,” Harding said in a statement. “It is allowing us to test the poorly understood connection between the lower atmosphere and space.”

The eruption also severed Tonga’s sole fiber-optic communication cable connecting the country to the outside world. NASA said in April that the undersea volcano eruption was “hundreds of times” stronger than the Hiroshima nuclear explosion.

“For comparison, scientists estimate Mount St. Helens exploded in 1980 with 24 megatons and Krakatoa burst in 1883 with 200 megatons of energy,” NASA said in a statement.