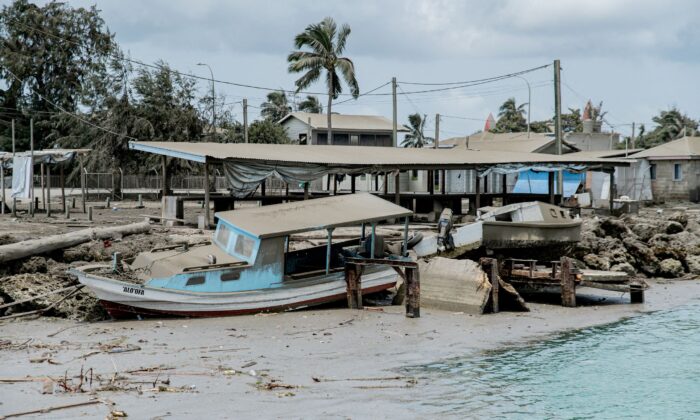 Tonga’s government on Tuesday announced a nationwide lockdown after two community cases of COVID-19 were discovered in the Pacific island nation, which is still recovering from last month’s volcano eruption and tsunami.

The two cases were detected after the Health Ministry tested 50 workers at the port of the capital Nuku’alofa, where humanitarian relief had been transported from around the world since the eruption, Tonga’s Prime Minister Siaosi Sovaleni said.

“We have not yet identified the ship because a number of ships had arrived, and we have not been able to identify which,” Sovaleni said in a press conference, Matangi Tonga Online reported.

Tonga’s Health Minister Saia Piukala said the two workers, who were fully vaccinated, tested positive for the virus last week but were asymptomatic. Both the infected workers and their family members have been quarantined.

Authorities declined to reveal the identities of the infected workers to prevent them from being “victimized,” Sovaleni said.

Tonga will go into nationwide lockdown on Wednesday at 6 p.m. local time, with the situation being reviewed every 48 hours to determine whether to extend the lockdown.

All interisland shipments and flights would be suspended until the lockdown is lifted, Sovaleni said, urging residents to wear masks in public.

“We are looking at goods that were offloaded. The most important thing at the moment is for us to slow down and stop those who have been infected. That is the reason for our nationwide lockdown because there was interisland transportation,” he said.

Tonga had previously reported only one case of infection since the pandemic began, making it one of the few countries to remain COVID-free. About 60 percent of Tonga’s 105,000 population are fully vaccinated, local media reported.

Tonga has been receiving humanitarian supplies from various countries since the Hunga Tonga-Hunga-Ha’apai volcano eruption and subsequent tsunami on Jan. 15, which wiped out an entire village on one of its small outer islands and killed at least three people.

The eruption also severed the Pacific island nation’s sole fiber-optic communication cable connecting the country to the outside world.

On Jan. 26, the government of Tonga permitted the Australian navy ship, HMAS Adelaide, with 23 personnel on board tested positive for the virus, to dock in Tonga to deliver humanitarian and medical supplies under a contactless protocol.

Permission was given on the condition that all international aid be delivered without any person-to-person contact and that resupplies sent by aid flights be unpacked for 72 hours to minimize the risk of infection.