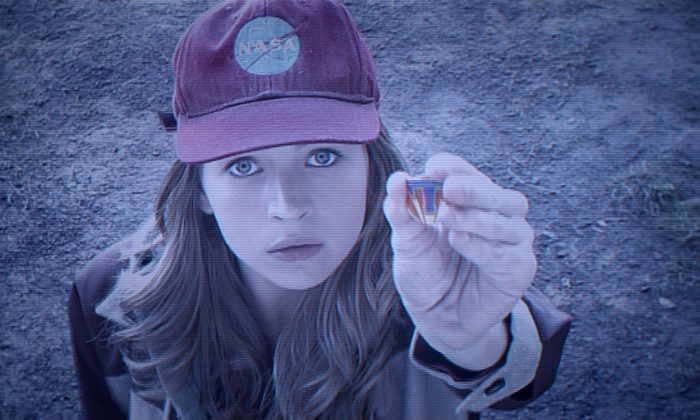 ‘Tomorrowland’ Bombed Because America Isn’t Brave Enough for Its Message

The first casualty of the summer movie season is Disney’s “Tomorrowland,” directed by Brad Bird. Though it narrowly squeaked into first place at the box office its opening weekend (barely beating out a sequel, “Pitch Perfect 2”), each succeeding week has seen its fortunes decline dramatically. (As of May 31, the film has grossed a worldwide total of $133.7 million against a budget of $190 million.)

This is a great shame since “Tomorrowland” is not only an enjoyable and beguiling romp, but it is also the only summer blockbuster in recent memory that actively asks something of its audience, and even questions the nature of what a summer blockbuster means.

“Tomorrowland” confounded expectations by relying heavily on theme and message to propel the story, with special effects eye-candy as only a secondary concern. More important, unlike the vast majority of summer films, “Tomorrowland” seeks to actually say something, and the message is not one that contemporary audiences want to hear.

In brief, “Tomorrowland” concerns Casey Newton (Britt Robertson), an extremely bright young woman chomping at the bit to use her intelligence to make the world a better place. Her father (Tim McGraw) is an engineer at NASA who will soon be out of a job as the space agency rapidly moves away from the early 1960s promise of actually doing space exploration.

After being arrested for trying to halt the shutdown of a NASA launch site, Casey finds a pin that, whenever she touches it, shows her visions of a glossy, high-tech Utopia—Tomorrowland. As she seeks to learn more about this Buck Rogers-inspired paradise, she meets a mysterious child, Athena (Raffey Cassidy), who leads her to Frank Walker (George Clooney), a former boy genius who first entered Tomorrowland himself when he brought his homemade rocket pack to the 1964 World’s Fair. The trio face dangers from both our world and the world of Tomorrowland as they try to find their way back in, and seek to pull our own world back from the brink of self-destruction.

As of this writing, “Tomorrowland” has a 50/50 rating among top critics on that most basic tool for movie buffs, RottenTomatoes.com. This is not surprising, considering how it seems that no two critics see the same movie. “Tomorrowland” is a critical and cultural Rorschach test—tell me what you think of it, and your aesthetics are laid bare.

For example, Charles Paul Freund at Reason.com has condemned the film as an Ayn Rand fable for Objectivism. In this reading, only the elite are allowed to enter Tomorrowland, and the fruits of its discoveries are not for the masses.

(Barry Hertz at the Globe and Mail wrote of director Brad Bird: “Unless you’re preternaturally gifted—unless you’re part of the 0.01 percent of us who are truly special, whose self-made superiority is undeniable—the writer-director behind ‘Tomorrowland’ can’t be bothered.”)

Other critics, John Nolte at Brietbart.com for example, dismiss “Tomorrowland” as a liberal save-the-earth-from-global-warming screed, too mired in science fantasy to even enjoy the label of science fiction.

Some perceive the future-vision of “Tomorrowland” as based on a white-male aesthetic, and is thus automatically suspect; others that the inclusive, multinational vision it presents merely a liberal sop. In short, responses to “Tomorrowland” are all over the map.

Even the critical arm of the science fiction community seems immune to the messages of “Tomorrowland.” Critical assessments in tightly cloistered fan communities are often driven by agendas or allegiances that make little sense to the uninitiated, but even by that yardstick, “Tomorrowland” has taken a licking.

For example, in an insight of staggering vacuity on the science fiction news blog io9.com, Charlie Jane Anders dismisses the film as so much “Baby-Boomer nostalgia at its most dreary,” and opines that the film ultimately “winds up feeling so much like you’re listening to a cranky rant about how things were so much better 50 years ago.”

Well … yes, that’s really the point. And it is a point that the viewer takes con amore, or not at all.

What’s Happened to Us?

“Tomorrowland” asks—directly, to the viewer’s face—why were we more optimistic 50 years ago, when we had less, than we are now when we have more? (At one point, Clooney’s character says, “The future looked different when I was a kid.”) And why, more importantly, are we glutting ourselves on apocalyptic rubbish like “Mad Max: Fury Road?” And why does our current world look so drab, so colorless, so … ugly?

Because, as Tomorrowland leader David Nix (Hugh Laurie) says, we like things that ask nothing of us. We, as a people, as a culture, and as a nation of former dreamers have given up. We would rather watch the world burn than save it, and woe to us for our self-fulfilling fantasies, predetermining our own failures. “Tomorrowland” holds up a mirror to our contemporary culture, and the reflection is not at all a pretty one.

It is a simple and sad reality of our culture that we have lost the taste for imagining a Big Future. These imaginings were once the national pastime of writers, movie makers, pulp magazine artists, and young people (and people young at heart) everywhere. Our visions of tomorrow were suffused with a bright, metallic art deco glow. The Big Future had a raw energy, a gee-whiz feel for boundless possibility, and a sense of expansion. It may have been junk, but it was glorious junk. And somewhere along the way, we just turned our backs on it.

“Tomorrowland” is an attempt to turn science fiction and pop culture away from its current nihilistic obsessions and channel that energy into something that celebrates life and imagines the Big Future.

It is instructive to look at two other science fiction films released this summer that have done terrific box office. “Avengers: Age of Ultron” has grossed over $1.3 billion worldwide, while the post-apocalyptic fantasia “Mad Max: Fury Road” has garnered $283.1 million worldwide.

“Mad Max: Fury Road” is more of the same as other films in the series—leather-clad roughnecks duke it out over gasoline in a post-nuclear wasteland. It is, in short, another brutal tale of survival in a future world of moral decadence. “Avengers: Age of Ultron” is perhaps more insidious, as its messages lie at the rotten core of a loud superhero spectacle.

One of the centerpieces of the film is a building collapsing under the brunt of an attack from the Hulk—and the audience is treated to seemingly endless scenes of white-dust-covered survivors, tears darkly streaking their faces, in yet another junk film reference to September 11th. It would be inconceivable for the heroes of “Tomorrowland” to so fetishize such a national tragedy, and it’s a mystery as to why we, as a nation, have never been able to come to grips with it.

Perhaps “Age of Ultron” provides its own answer: At the end, hero Vision (played by Paul Bettany, sounding like Peter Lawford and looking like Gumby) and villain Ultron (voiced by James Spader) agree that mankind is “doomed.”

“Tomorrowland” is generating more critical meditations than it is ticket sales, and it is this ongoing discussion that may give the film legs and relevance (if not success) for years to come. Perhaps “Tomorrowland” itself will act like one of the pins in its own narrative, generating visions of a possible super-science tomorrow in those drowning in our drab environs. “Tomorrowland” says that things do not have to be the way they currently are, and that each and every one of us has it in our power to make that gleaming tomorrow if we have the heart and the hands to build it.

James Abbott writes about culture both high and low. His blog is The Jade Sphinx at TheJadeSphinx.blogspot.com

James Abbott
Follow
James Abbott writes about culture both high and low; his blog is The Jade Sphinx at thejadesphinx.blogspot.com