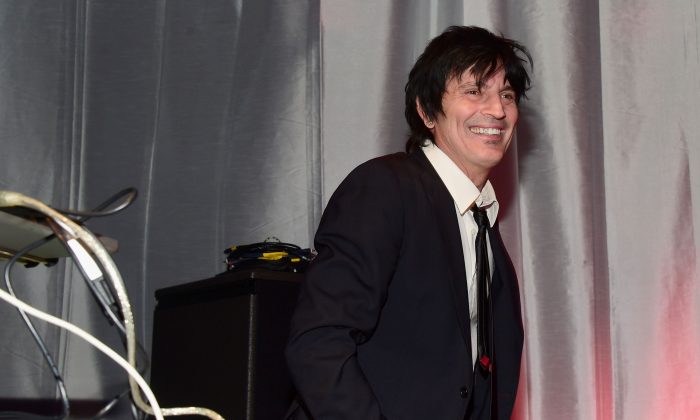 Mötley Crüe drummer Tommy Lee and social media personality Brittany Furlan got married on Valentine’s Day, a year after they announced their engagement.

Lee, 54, shared the development on Instagram, showing two dogs wearing a dress and a tuxedo.

Furlan also shared the same photo in confirming their nuptials.

The pair started dating in 2017 before they announced their engagement last Valentines’ Day.

They didn’t share any photos of their wedding, but months ago, they posted an Instagram photo showing them in hotel robes underneath an altar.

“We were just messing around,” Furlan told TMZ about the photo at the time. “We just thought it was funny… It’s actually funny because they even changed it on Wikipedia, and they don’t believe us. It’s kind of funny.”

Furlan spoke about the alleged abuse that took place during his marriage with Anderson.

“I think he’s been a really good person this whole time, and I think what happened between them – only they will know the truth about that situation. And, that’s all I have to say about that. Tommy is very funny, he’s goofy, he’s my best friend. At his core, he has a really big heart …  he really does,” Furlan told Fox News.

According to E! News and People magazine, the “Lord of the Rings” actor proposed to Perry on Valentine’s Day, Feb. 14, and Perry confirmed the news.

Perry’s mother, Mary Hudson, wrote on Facebook: “Look who got engaged last night.” A photo showed the bride-to-be with her fiance under a floral arrangement, the two news outlets reported, adding that the post was deleted.

He also shared a quote on Valentine’s Day, saying, “A shallow person will have only shallow relationships. Real love is not one person clinging to another, it can only be fostered between two strong people secure in their individuality.”

The actor also wrote: “Antoine de Saint- Exupery, author of The Little Prince wrote in a work called Wind, Sand and Stars, ‘Love is not two people gazing at each other, but two people looking ahead together in the same direction.” The quote was attributed to Daisaku Ikeda.

“I’m very pragmatic and logistical and I am less fantastical about things,” Perry recently told Paper magazine, according to E News. “I mean, I was married when I was 25. I’m 34. It was almost 10 years ago. I was like, ‘One person for the rest of my life,’ and I’m not so sure that that idea is for me. I’m just such a different person than I was.”

“Katy likes how down to earth Orlando is,” a source told E! News in January 2016. “They seem to be getting serious and are an official couple. She calls him her boyfriend.”