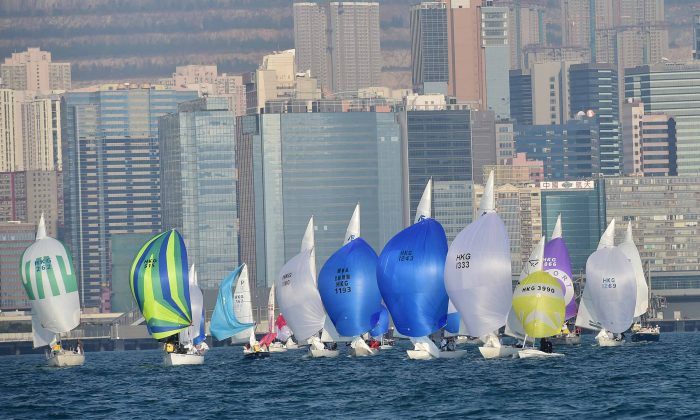 HONG KONG—The Tomes Cup event took place in Victoria Harbour on Saturday Jan 10 in brilliant sunshine and quite a good breeze, producing a yachting spectacular involving 63 boats. This annual event is the 3rd race in the 4-race Royal Hong Kong Yacht Club’s Old Mutual Top Dog Series. The first two events: the Lipton Trophy and Around the Island race took place in November 2014 and the final race in the series, the HKRNVR Memorial Vase will take place on May 1, 2015.

This Tomes Cup pursuit race sets start times according to a boat’s rating with the objective of giving all classes an equal chance of success. The race started in Kowloon Bay with up-wind legs to Shau Kei Wan and a bottom mark in Kowloon Bay. Boats circumvented the course twice and continued further specified loops until the 4.30pm finishing time, finishing down-wind close to the original start point.

Dragon Championships
This coming weekend is the start of the Dragon Class Championships 2015 a series of 10 races over 4-days of racing on Jan 17-18 and Jan 23-24. The races will take place off Lama Island.