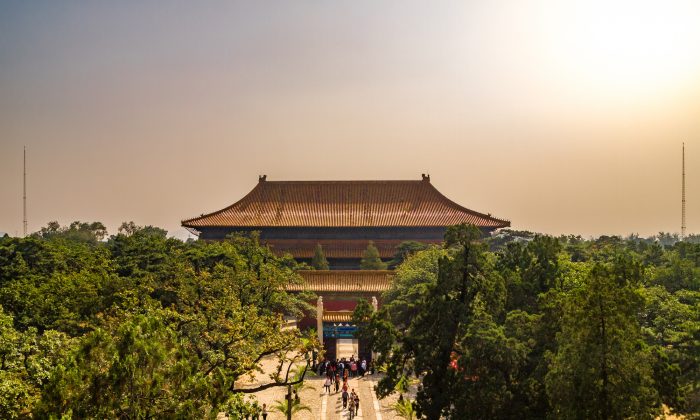 The Changling Tomb, one of 13 mausoleums that serve as the final resting place for Ming Dynasty emperors, in Beijing. (Takashi Images/Shutterstock.com)
Social Issues

China’s Ming Dynasty tombs—a UNESCO World Heritage site—are a collection of mausoleums that were the final resting place for China’s emperors during the dynasty that lasted from 1368 to 1644. Most of the tombs, located in a cluster in Beijing that is known as the Ming Thirteen Mausoleums, contain jewelry and precious artifacts.

Those treasures proved too tempting for a group of tomb raiders.

Citing court documents, the report said the ring stole and then resold 12 artifacts between 2010 and 2016, all from tombs, temples, and other culturally significant sites in Beijing. At the Ming mausoleums, the ring stole a pair of stone decorative elements similar to candle holders from the tomb where the last Ming emperor, known as Chongzhen, was buried.

Other pilfered items from previous exploits include a Ming-era stone door frame carved with a Taoist immortal, a Qing Dynasty (China’s last imperial dynasty, 1644–1911) stone incense burner, and Buddha sculptures from the Ten Thousand Buddhas temple in Beijing. They then sold their booty for profit, such as a stone vase sold to a Mr. Lin for 150,000 yuan (around $22,600) in 2016.

In many cases, the artifacts were not discovered to have gone missing until about half a year later, according to Beijing Youth Daily.

Tomb-raiding in China has increased in recent years, owing to a growing trend of organized raiding teams equipped with high-tech gear. A 2016 Chinese media report revealed that in Henan Province, home to the ancient capital of Luoyang, many classes are offered on how to raid tombs, including lessons on land surveying skills and how to use probes, shovels, and explosives.

In many cases, local officials collude with criminals to reap rewards from the tomb-raiding. Chinese media reported in 2003 that 13 tomb robbers in the Xia County in Shanxi Province were able to go undetected because they were being “protected” by three police officers from the local public security bureau, who took a cut of their profits.

In other cases, local authorities hire professional archaeologists who turned out to be secret tomb raiders.

High officials also try to cash in. “Antique dealers would collude with grave robbers and send the unearthed treasures to high-ranking officials who are antique collectors themselves. And then business executives buy the treasures off the officials,” according to a September 2010 report by Chinese Social Sciences Today.