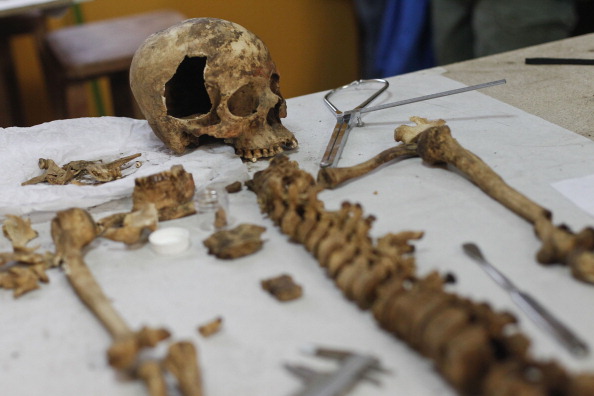 A skeleton belonging to a woman from the Wari empire discovered at El Castillo de Huarmey site, 185 miles north from Lima is shown on June 27, 2013 in Lima. (ERNESTO BENAVIDES/AFP/Getty Images)
Science

A tomb was discovered in Peru that included mummified women, evidence of human sacrifices, gold pieces, and gives researchers clues about the Wari empire that ruled Andes region before the Incas.

“For the first time in the history of archeology in Peru we have found an imperial tomb that belongs to the Wari empire and culture,” lead archaeologist Milosz Giersz told Reuters.

Researchers found the mausoleum at a pyramid site called the El Castillo de Huarmey, located some 185 miles north of Lima.

They said that most of the mummified remains were female, including royalty.

“The women were buried with finely engraved ear pieces made of precious metals that once were believed to be used only by men,” archaeologist Patrycja Przadk told the news agency.

Giersz, with Poland’s University of Warsaw, told USA Today there were three queens with servants buried in the mausoleum. They estimated that the queens and others were buried some 1,200 years ago.

“I was really very, very surprised to find the site unlooted,” Giersz told the newspaper.

Bioarchaeologist Wieslaw Wieckowski told NBC News that there were six skeletons not wrapped in textiles, suggesting they were likely human sacrifices.

“They were people thrown into the grave before the grave was sealed,” he said. “They were lying on their bellies, in an extended position and their limbs went in different directions.”

Historians think that the Wari were the first to unite tribes to form a civilization in the Andes, living from 600 AD to 1100 AD–hundreds of years before the Inca empire.