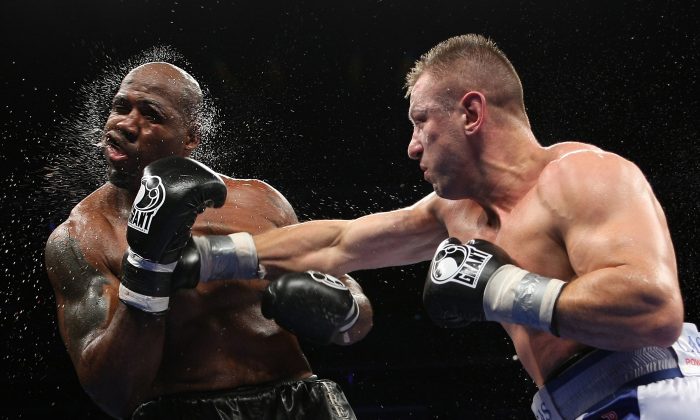 Tomasz Adamek, right, of Poland, lands a punch on Travis Walker during the fifth round of a heavyweight boxing match at the Prudential Center in Newark, N.J., Saturday, Sept. 8, 2012. Adamek won by TKO in five rounds. (AP Photo/Tim Larsen)
News

The headline fight is scheduled to take place at 9 p.m. ET on Saturday, March 15.

The fights will be broadcast on the NBC Sports Network.

A live stream doesn’t appear to be available.

The original date was postponed because Adamek said he was feeling ill.

“I’m not concerned with the layoff. He’s a fighter with a lot of experience,” said Adamek’s trainer, Roger Bloodworth, to Ring TV. “Most of your world champions don’t fight every month. That’s important for a young fighter, to keep busy. But when you’re at a certain level, your conditioning and your experience will tell.”

But Glazkob is looking to instill hope in his Ukrainian countrymen with a win.

“This my country, and I’ve got my family over there, and I’m concerned and worried about it. I hope that the politics are going to stop soon,” said Glazkov.