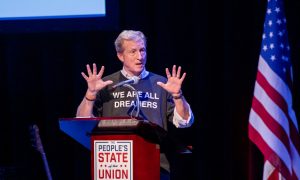 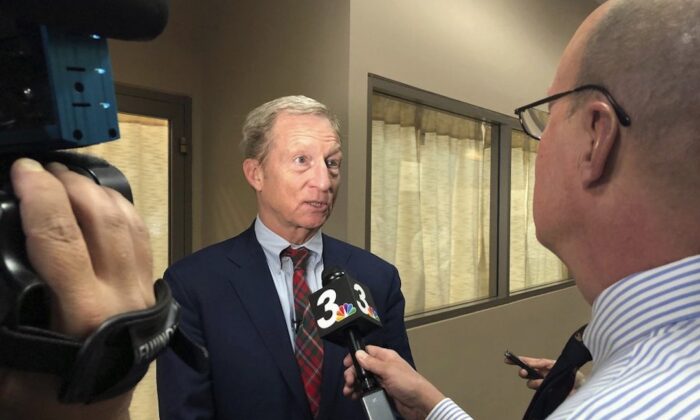 'This is gonna sound a little strange'
By Jack Phillips

Democratic candidate Tom Steyer told an audience in Northwood, Iowa, on Monday he doesn’t want to be president, but he suggested that the office of the presidency would grant him the ability to do things that he otherwise may not be able to do.

“This is gonna sound a little strange kinda—I don’t want to be President,” the billionaire hedge fund manager and philanthropist told voters, according to a video provided by reporter Maura Barett.

Steyer, 62, entered the race months after most of his competitors, but Steyer has already spent $4 million more on internet ads than any other Democrat. In Iowa alone, he has spent twice as much on television advertising as Pete Buttigieg, and more than all the others next on the list combined, according to data obtained by The Associated Press.

“But I do want to do things as president. You know, I am running because I thought—until this week, I was the last person to get in,” Steyer added to voters on Monday.

Regarding the current Democrat crop of candidates, he added that “any one of those people on that stage is a thousand times better … Really. I believe that, and I will, there is 100 percent probability that I will be supporting that person as hard as I can.”

Later, he said that there has been a “cruelty exhibited towards the American people, that I’m going to stop fighting these people. No way! I don’t think of myself as a tough person, but I can tell you: I don’t like mean people. They don’t scare me. And I’m very angry about it. There is a playbook here that is cruel to Americans. Intentionally so.”

Earlier this month, Steyer showed signs of being both excited and annoyed by former New York City Mayor Michael Bloomberg’s presidential bid during an interview as he trekked across South Carolina on a recent campaign swing. Asked whether there was room for another billionaire in the race, he responded: “I don’t even know if there’s room for another Republican in this race.”

“He’s been a Republican, an independent. Didn’t he just register as a Democrat?” Steyer said in mid-November, according to AP.

But Steyer added that the move suggests there’s hope for a candidate like him.

“You know what that says to me? Exactly what I’ve been saying all along. This race is completely up in the air—seriously,” he said.