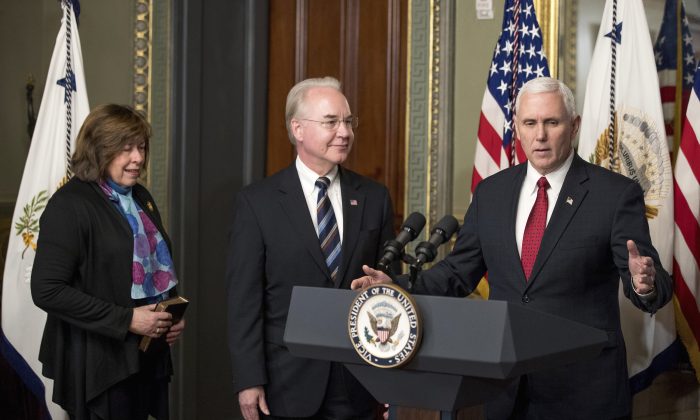 Former Republican Representative from Georgia, Tom Price, was sworn in as Secretary of Health and Human Services on Feb. 10.

The Senate confirmed his appointment with a 52-47 vote split along party lines after Democratic Senators protracted the hearing until 2 a.m.

Price, 62, has been a U.S. Representative since 2005, after serving as Georgia State Senator since 1997. He was Chairman of the House Budget Committee and a member of the Ways and Means Committee.

As Health Secretary, Price’s major task will be to dismantle the Affordable Care Act (ACA) commonly known as Obamacare, and then implement its replacement once Congress settles on what it should look like.

He has submitted a bill calling for the repeal and replacement of Obamacare every year since the act passed.

House Speaker Ryan drew on Price’s plans, and those offered by other Republican lawmakers, to produce “A Better Way to Fix Healthcare.” The general approach is to move toward a free market and away from mandates and governmental administration of health insurance.

The Republicans describe their approach as “patient centered.” Among other measures, it involves giving individuals tax credits and health savings accounts to make their purchase of health insurance portable. Insurers can offer simpler and lower cost plans than are available under the ACA, which requires everyone to purchase plans with a full range of services.

Also, insurance can be offered across state lines, introducing the competition of a national market for health care. There is also an emphasis on tort reform, reducing the cost of malpractice insurance.