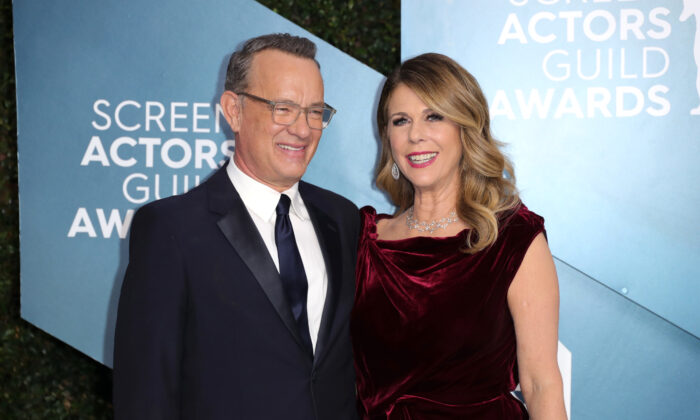 Tom Hanks Opens up on Fighting Off COVID-19 Symptoms

“Rita went through a tougher time than I did,” said Hanks, 63, during an episode of the National Defense Radio Show on April 16. He was referring to his wife, Rita Wilson, who also tested positive for the CCP (Chinese Communist Party) virus, which causes the disease COVID-19.

“She had a much higher fever. She had lost her sense of taste and sense of smell,” he said. “She was so nauseous, she had to crawl on the floor from the bed to the facilities. It lasted a while,” the “Forrest Gump” actor said on the program.

Hanks said that he suffered “some bad body aches and was very fatigued, and that’s how the COVID-19 went through us.”

“Whoever it was, doctor, nurse, would come into our air pressurized room, our isolation rooms. She said, ‘How are you feeling?’ and I said, ‘I just had the weirdest thing. I just tried to do basic stretches and exercises on the floor and I couldn’t even get halfway through,’ ” he said, adding that he was “wiped” after 12 minutes of exercising.

“And she looked at me through her glasses like she was talking to the dumbest human being,” he said. “And she said, ‘You have COVID-19.’ ”

Hanks and Wilson tested positive for the CCP virus while filming in Australia last month, becoming at the time perhaps the highest-profile celebrities to contract the illness.

“It was relatively early in Australia’s response to the coronavirus, and they wanted us to not give it to anyone else,” said Hanks. “That’s why we were in lockdown.”

Wilson told CBS News last week that her symptoms were “chills like I’ve never had before,” adding that she suffered from a 102 F fever at one point.

“Looking back, I also realized that I was losing my sense of taste and smell, which I didn’t realize at the time,” Wilson said.

Both she and Hanks may have been exposed to the CCP virus at the same time, she added.

“Well, that’s what they told us and that’s what the belief is. We recently have been part of a study where we’ve donated our blood, and we’re waiting to hear back if our antibodies will be helpful in developing a vaccine. But also, if we are able to donate plasma that can be used as donation to other people who are suffering from the virus because we are immune.”