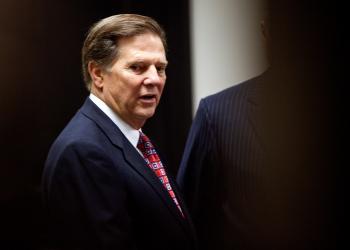 Alex Johnston
View profile
Follow
biggersmaller
Print
Tom DeLay, the former House majority leader, was sentenced to three years in prison and 10 years of probation on Monday. He was convicted on conspiracy and money laundering charges in November, according to CNN and other media reports.

DeLay, who was nicknamed “The Hammer,” was one of the most influential men in Washington during his tenure as House majority leader. He was known for his tenacious tactics in pushing legislation through the House.

He was taken from Travis County Court in Austin, Texas to the county jail, according to the New York Times. His attorneys quickly posted a $10,000 bond.

"I always intended to follow the law," DeLay said, according to CNN. "I'm not stupid. Everything I did I had accountants and lawyers telling me what to do and how to follow the letter of the law, even the spirit of the law."

In 2005, the Republican majority leader was charged with illegally channeling corporate money to help elect Texan Republicans to Capitol Hill. In the 2002 elections, he was accused of swapping a total of $190,000 from the political action committee he founded, TRMPAC (Texans for a Republican Majority). He subsequently resigned from his majority leader seat, and eventually from his congressional one as well.

In November 2010, DeLay was convicted on both charges at Travis County Court. On Monday, he received a three-year prison sentence for conspiracy and a five-year for money laundering. However, Judge Pat Priest allowed DeLay to serve the five-year sentence with a 10-year probation and community service instead.

“Before there were Republicans and Democrats, there was America, and what America is about is the rule of law,” the judge said, according to the Times.

DeLay, however, insisted that he was innocent.

"Judge, I can't be remorseful for something I don't think I did," he said.