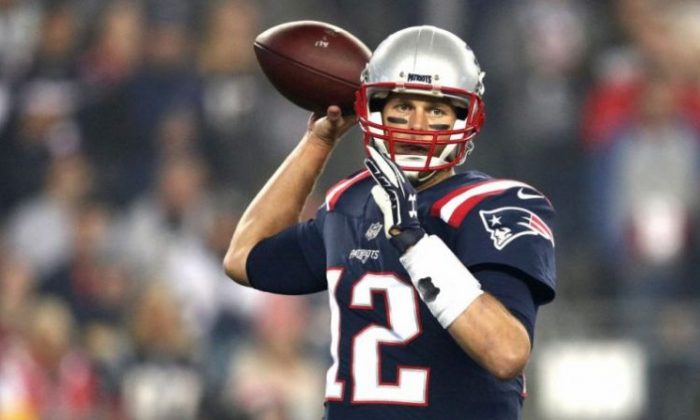 Tom Brady No. 12 of the New England Patriots throws during the first quarter of a game against the Atlanta Falcons at Gillette Stadium on Oct. 22, 2017, in Foxboro, Mass. (Maddie Meyer/Getty Images)
NFL

There is speculation that New England Patriots quarterback Tom Brady might not play against the Jacksonville Jaguars during Sunday’s AFC Championship game.

Brady, during a press conference on Friday, Jan. 19, refused to talk about his reportedly injured hand. He showed up to the conference wearing red gloves.

Here was the beginning of Tom Brady’s press conference. Quickly made it clear he wouldn’t talk about the hand. pic.twitter.com/uCcTNLiqZn

A reporter asked him, “Did you throw any footballs today.” Brady replied and said he wouldn’t “talk about that.”

According to the NFL Network, Brady has a cut on his right thumb (on his throwing hand). He suffered the injury during practice.

The cut was reportedly gushing blood and needed stitches.

A source later told the NFL Network that Brady was “zinging it pretty good” as he was throwing during practice.

“Tom looks excellent every day. One of the best-looking people I’ve ever met.”

“When you look at Tom, (you look at) the facial (region), it’s hard to look at anything else. So, I really only saw his face.”

Tom Brady is keeping his status for Sunday up in the air. pic.twitter.com/ucrL0rMnZR

When he was asked during the press conference about why he was wearing gloves, Brady replied, “I’ve worn them before,” according to an NFL Network transcript of the exchange.

Another asked him, “Have you played in a game in more pain than you’re in right now?”

And when asked about whether he’s played a game with gloves, he said, “It’s been a long time.”

Question: Is QB Tom Brady going to be a game-time decision?#Patriots coach Bill Belichick: "It's Friday."

(I would not be surprised if #Patriots drop to -7 in the near-term.)

ESPN reported that he didn’t partake in team-based drills after warmups on Thursday.

But Patriots receiver Danny Amendola told the network that he caught footballs from Brady during practice. “He looked good,” Amendola said.

“I think the team has worked hard to get to this point, and it will be a great game,” Brady said. “Playing against a really good team that’s good in all phases, we’re going to have to play really well.”