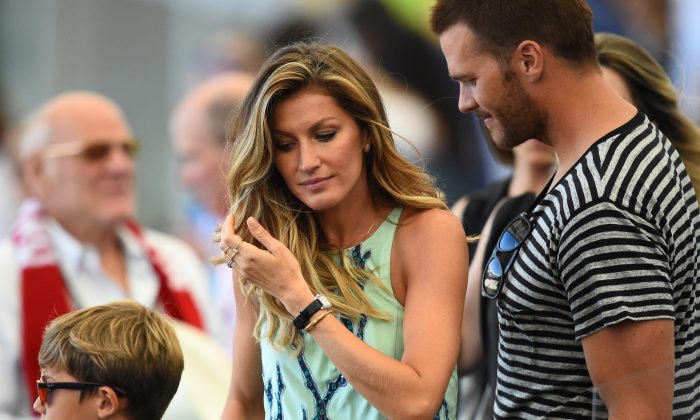 Brazilian model Gisele Bundchen (C) walks alongside American football player Tom Brady during a closing ceremony ahead of the final football match between Germany and Argentina for the FIFA World Cup at The Maracana Stadium in Rio de Janeiro on July 13, 2014. (AFP/Getty Images)
US

Tom Brady’s wife Gisele Bundchen recently signed a multiyear deal with Under Armour that’s believed to be lucrative, although the financial terms were not disclosed.

Bundchen has already been featured in a teaser video from Under Armour, which sells shoes and apparel across the world.

Brady had been with Under Armour since 2010.

Both Bundchen and Brady make a sizeable amount of money, with Forbes reporting that Bundchen made about $47 million last year as the world’s highest-earning model and Brady receiving a $30 million signing bonus for a restructured deal he signed with the New England Patriots last year.

Bundchen will be part of the company’s women’s campaign, which started last month with a video of ballerina Misty Copeland that went viral.

Skier Lindsey Vonn and tennis player Sloane Stephens are also part of the campaign, which has the I Will What I Want slogan.


Meanwhile, Brady recently told Man of the World that he sometimes has to vie for attention from Bundchen.

“I like attention from her, so when I’m not getting it I let her know in immature ways, like a young, immature child would,” said Brady, 37.

“You throw fits and you pout and you whine until you get what you want,” he said. “She’s on to me, she knows all of my tricks. So now I have to learn new tricks.”

He also said that Bundchen is often bothering him.

“I’m a guy, what doesn’t she get on me for?” he says. “That’s just what wives do.” He concluded with a compliment, though.

“My wife speaks five languages,” he says. “I always tell her I speak two: English and football.”

New England Patriots quarterback Tom Brady laughs as he speaks to reporters prior to team practice in Foxborough, Mass., Wednesday, Sept. 3, 2014. The Patriots are preparing for their opening NFL football game against the Miami Dolphins on Sunday in Miami. (AP Photo/Elise Amendola)

The NFL has spiced up the end of the regular season with a steady diet of division matchups. It hasn’t done a bad job of juicing the opening weekend with just that, too.

New England is at Miami in a very early AFC East showdown, while the entire AFC North faces off, with Cincinnati at Baltimore and Cleveland at Pittsburgh. The NFC South has the same setup, with New Orleans at Atlanta and Carolina at Tampa Bay.

“It’s a great opportunity for us to have another growing step,” Bengals left tackle Andrew Whitworth said of visiting Baltimore, where Cincinnati has dropped its past three games.

“We’ve talked about it over the years. We’ve had this little step here or that little step there where this team’s continued to improve. But we haven’t won in Baltimore.

“So what a great opportunity for us to go and try to get that milestone out of the way.”

It’s also a critical game in what could be the tightest three-team race in the league. Of course, Pittsburgh would need to avoid stumbling against Cleveland to validate its place in that race.

Yet the main focal point at Heinz Field could be whether Johnny Football gets to play any football. Will first-round pick Johnny Manziel, a backup to Brian Hoyer, get some snaps at quarterback for Cleveland?

“I said that I expect them to utilize him in some way during the course of the game,” Steelers coach Mike Tomlin said. “I didn’t say they were going to start him.”

The season kicked off Thursday night when defending champion Seattle ran around, over and through Green Bay, 36-16. Marshawn Lynch rushed for 110 yards and two touchdowns, Russell Wilson threw a pair of touchdown passes, and the Seahawks kept Aaron Rodgers and the Packers’ offense off-balance much of the night. Rodgers threw for only 189 yards.

Also Sunday, it’s Indianapolis at Denver in the only matchup of 2013 division winners; San Francisco at Dallas; Jacksonville at Philadelphia; Buffalo at Chicago; Washington at Houston; Minnesota at St. Louis; Tennessee at Kansas City; and Oakland at the New York Jets.

The Monday night doubleheader has the New York Giants at Detroit, followed by San Diego at Arizona.

Tom Brady remembers the Patriots’ trip to Miami last December, although he’d prefer to forget it: a 24-20 defeat.

“We put a lot of work in over the course of the offseason and the summer to put ourselves in a position to capitalize on this game,” Brady said. “There’s not much more you could ask for than to have such a great opportunity.”

Miami’s revamped offensive line, coming off the bullying scandal, will be a focal point.