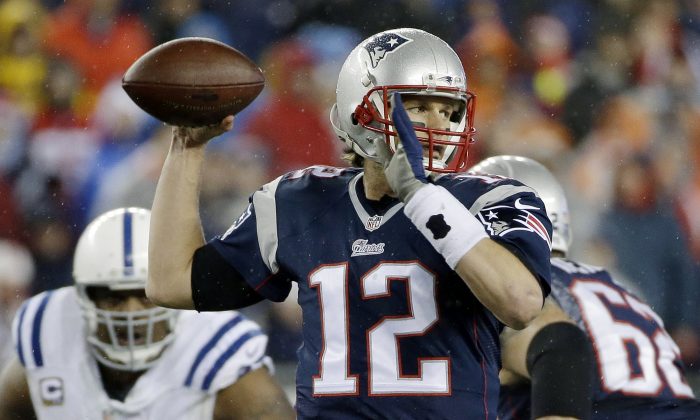 FILE - In this Jan. 18, 2015, file photo, New England Patriots quarterback Tom Brady looks to pass during the first half of the NFL football AFC Championship game against the Indianapolis Colts in Foxborough, Mass. The NFL is investigating whether the Patriots deflated footballs that were used in their AFC championship game victory over the Colts. The inquiry was first reported by the website for WTHR-TV in Indiana, citing an unnamed source. On his regular weekly morning-after-game appearance Monday, Jan. 19, 2015, on WEEI radio, Brady said he wasn't aware of the report about the league's investigation into whether footballs were properly inflated against Indianapolis. (AP Photo/Matt Slocum, File)
NFL

Tom Brady: ‘This Isn’t ISIS. No One is Dying’ in DeflateGate

New England Patriots quarterback Tom Brady said that the allegations against the team that they deflated footballs during the AFC Championship game against the Indianapolis Colts isn’t that big of a deal.

“We’re going to be fine. This isn’t ISIS,” Brady said at a Thursday press conference.  “…No one is dying.”

Brady was referring to the Islamic State, or ISIS, which has taken over large chunks of Iraq and Syria and is using brutal methods to administer punishment to dissenters and criminals. The U.S. has deemed it a terrorist organization and is leading a coalition to bomb ISIS targets in the region.

Brady said Thursday that he didn’t know how New England ended up using underinflated balls in its win Sunday against the Colts in the AFC Championship game.

Brady says he doesn’t know the protocol for handling game balls after he chooses them a few hours before game time.

Like his coach Bill Belichick said a few hours earlier, Brady said he learned about the issue the morning after the game.

Brady says he has not been contacted by the NFL as the league investigates whether the team cheated.

Brady says the issue is one thing the team has to deal with as it prepares to play the Seahawks for the NFL title on Feb. 1.