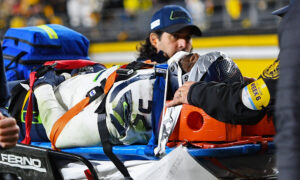 Tom Brady: New England Patriots Quarterback Is Selling a $200 Cookbook On His Website

Tom Brady is set to serve a four-game suspension—one-fourth of the season—by the NFL for his part in the infamous “deflategate” scandal. It would appear with all that time on his hands, he’s planning to start a new hobby—like cooking.

The two-time NFL MVP is actually offering up a “Nutritional Manual” on his website, for a whopping $200. For that $200 cookbook price tag, the buyer would get 89 seasonally-inspired recipes and information about the core TB12 (Tom Brady #12) nutritional philosophies.

Here’s a screenshot of the book:


The manual features a wooden (maple) cover and is printed on 100-pound text paper. And though refunds/returns aren’t allowed, owners of the manual in the future will periodically get additional pages with updated or new recipes as they become available.

Whatever it’s selling for though, you can’t fault the results of what the four-time Super Bowl-winner eats. The two-time All-Pro’s diet consists of no dairy, caffeine, sugar, mushrooms, pepper, or eggplant. Tomatoes are a rarity. Meanwhile, green vegetables are a mainstay for the 38-year-old, who’s showed no signs of slowing down.

In addition to his own dietary disciplines, Brady has also spoken out against the health effects of snacks like Coca-Cola and Frosted Flakes.

Brady’s fitness regime though, is as important now as it ever has been been. Fellow quarterback Peyton Manning once seemed physically invincible until the end the 2014 season, when injuries started to take their toll. By the 2015 season, the then-39-year-old Manning’s production was the worst of his career and he retired following the season. Maybe he should have bought Brady’s cookbook.