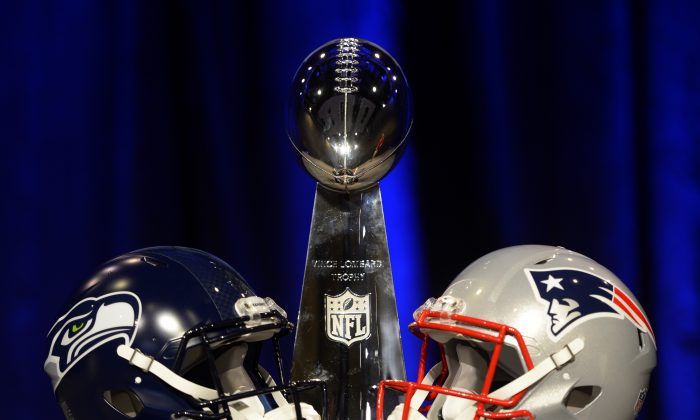 The Vince Lombardi Trophy sits alongside the helmets of the Seattle Seahawks (L) and New England Patriots before a press conference of the coaches of Super Bowl XLIX at the Phoenix Convention Center in Phoenix, Ariz., on Jan. 30, 2015. (Timothy A. Clary/AFP/Getty Images)
NFL

Lane picked Brady off on third down in the red zone. The score is still 0-0.

Lane was injured following the play, and he’s unlikely to return.

WASHINGTON (AP) — President Barack Obama on Sunday said the NFL should consider how referees can control game footballs instead of individual teams and he defended his aggressive stance with congressional Republicans during a live interview during NBC’s Super Bowl pregame show.

The Obama interview mixed a discussion of the game’s high-profile controversy — deflated footballs — with a brief discussion of politics. But the president ducked picking between possible 2016 Democratic presidential contenders Joe Biden and Hillary Rodham Clinton. “Love ’em both,” Obama said with a smile.

He also wouldn’t pick a favorite in the Patriots Super Bowl match-up against the Seattle Seahawks. “I think it’s always wise for me not to choose a team because then I just alienate one big city,” Obama said.

As the NFL investigates how the New England Patriots used the deflated balls in their 45-7 AFC championship victory, Obama said the Patriots would have defeated the Indianapolis Colts “regardless of what the footballs looked like.”

“The one thing I did not realize — and I’ll bet most fans didn’t — was that each team prepares its own footballs and brings them to the game,” Obama said. “I don’t think there’s any other sport like that so I’m assuming one of the things the NFL is going to be doing just to avoid any of these controversies is figuring out how the officials are in charge of the footballs from start to finish.”