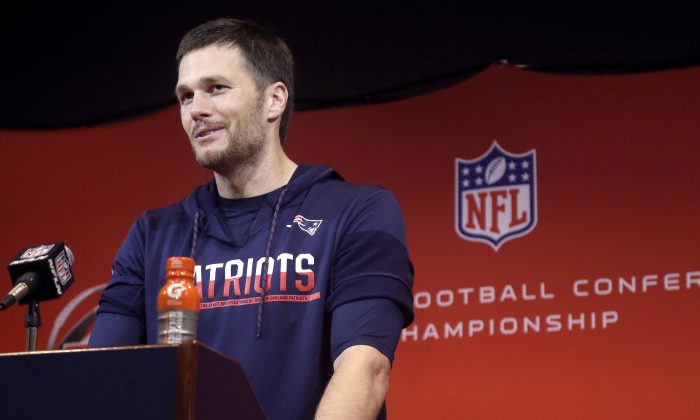 New England Patriots quarterback was criticized on social media for jumping off a cliff with his 6-year-old daughter in a viral video.

In the clip, the six-time Super Bowl champion is seen with his daughter at a swimming spot in Costa Rica. The girl appears hesitant before they both jump, as Brady held her by the arm.

Brady did not want to dive in alone … Good ole Tom 😂

In a tweet, Brady wrote that if his daughter, Vivi, “is going to be an Olympic champion one day, it probably won’t be synchronized diving.” He added, “Daddy always gives her a 10 though.”

She landed in the water, but some people said it was dangerously close to rocks.

“Anything for a selfie … This irresponsible act follows Brady’s dimwitted wife posting pics of their children riding horses without helmets. Tom Brady DRAGS daughter off dangerous cliff after she hesitates before jump,” said one woman on Twitter, slamming him with the hashtag, “#DumbJock.”

If Vivi is going to be an Olympic champion one day, it probably won’t be in synchronized diving. Daddy always gives her a 10 though! 🏅🏅🏅

Added another, “Bruh she lucky she didn’t hit rock.”

Other people went as far as describing it as “child abuse.”

Wrote one, “He endangered the welfare of a minor and child protective custody should investigate this immediately.”

However, a number of people defended the Patriots quarterback.

“Relax people. She was fine. And is fine. I can remember stuff like that back in the 60’s. Neg reactions are off spring of PC BS,” said one.

Another opined: “I Don’t like Tom Brady but he should be praised not bashed for pulling his daughter out away from the rocks. She wanted to jump off he wasn’t forcing her to. But she hesitated.”

Said another, “Thank goodness he had his daughters arm… she hesitated there.”

“Trying to pull her away from the rocks obviously,” another said.

“That was so cute!” an Instagram user told him.

Earlier this month, Brady posted a cryptic quote from a rap song: “Treat my first like my last, and my last like my first!” Some thought he was hinting at retirement when he made the post in early July.

The post included photos of him during training camp.

Brady will turn 42 years old in August. After being drafted by New England in 2000, he has already played 19 seasons with the Patriots.

During the 2018-19 season, Brady led the Patriots to claim their 6th championship as the oldest starting quarterback to win a Super Bowl, surpassing Peyton Manning, who was 39 when he won Super Bowl 50.

But now, some fans are stressed out at the notion of Brady considering retirement.

“Please don’t use words like ‘last’ when referring to your career, thanks,” said another.