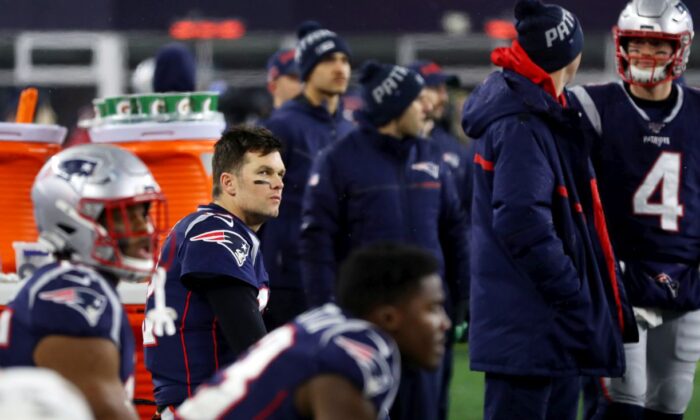 Tom Brady of the New England Patriots looks on from the bench during the fourth quarter of the AFC Wild Card Playoff game against the Tennessee Titans at Gillette Stadium in Foxborough, Mass., on Jan. 04, 2020. (Photo by Maddie Meyer/Getty Images)
Entertainment News

Tom Brady on Playoff Exit: ‘I Don’t Know What the Future Looks Like’

New England Patriots quarterback Tom Brady was asked if he wanted to come back after his team lost to the Tennessee Titans on Saturday and were eliminated from playoff contention.

“I love the Patriots,” Brady said, according to USA Today. “This is the greatest organization and playing for Mr. (Robert) Kraft all these years, and for coach (Bill) Belichick. There’s nobody who’s had a better career, I would say, than me—just being with them.”

In another interview, Brady, 42, couldn’t make any predictions.

“I don’t know what the future looks like, and I’m not going to predict it,” he said, CNN reported. Brady is set to become a free agent for the first time in his career next season, triggering speculation that he could retire or play for another team.

When he was asked about whether he would retire, Brady said, “I would say it’s pretty unlikely, hopefully unlikely.”

“I personally appreciate everything they’ve contributed — not just this year, but a lot of years” Brady also told USA Today. “Just very grateful for the experience of playing this year for the team, this organization, and over the course of my career, too. I appreciate it. I hope I’ve always tried to do the right thing out there. Who knows what he future holds? So, I’ll leave it at that.”

Belichick was also asked about Brady’s future following the game, but he wouldn’t address it.

“We just finished the game. We’re focused on this game, okay,” he told CNN.

The Titans defeated the Patriots 20-13 on the back of running back Derrick Henry, who tallied 182 yards and a touchdown.

Brady completed 20 of 37 passes for 209 yards with no touchdowns, throwing a game-clinching interception that was returned for a touchdown. That left him with a lower quarterback rating than Ryan Tannehill, who threw for a total of 72 yards in his first career playoff appearance.

Brady’s last pass was intercepted and returned for a touchdown by Logan Ryan, a teammate during two championship seasons, sending the Titans to a divisional-round matchup with the Baltimore Ravens. Brady walked off the field, his helmet off and his head hanging low, surrounded by photographers and security, before jogging the last few steps to the stairway that leads to the Patriots locker room.