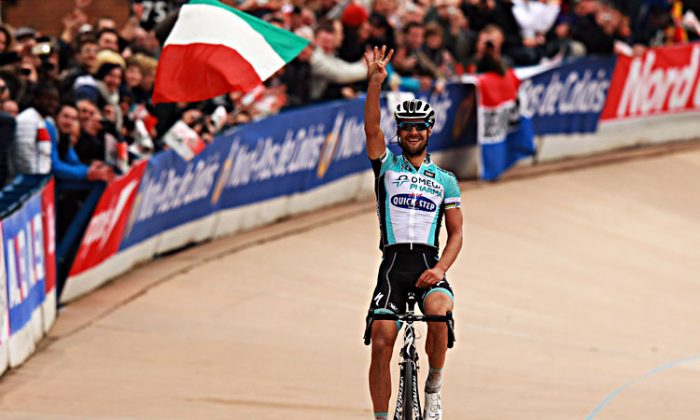 Tom Boonen Omega Pharma-Quick Step attacked alone 53 km from the finish line and no one had the legs to catch him. (Bryn Lennon/Getty Images)
Cycling

Omega Pharma-Quickstep’s Tom Boonen continued his amazing comeback with his ninth win of the year, and it was a huge win in a huge race: Boonen won the 2012 Paris-Roubaix cycling race by 1:39, a huge margin. He is only the second rider in the race’s 117-year history to win the race four times.

Boonen attacked 53 km from the finish and rode the final hour-and-a-quarter of the race alone. He could have stayed with the leaders until the final few hundred meters and won with his powerful sprint; instead he put on a display of power and toughness which no one else could come close to matching.

“Today was one of my best days in my career,” Boonen told cyclingnews.com.

“I was not really thinking about the winning the race or matching the record. I was just fighting myself. I was taking it step by step, cobblestone by cobblestone, kilometer by kilometer. If you start a race like this and think about the whole distance then you make it harder than it is. Riding this way not something I often do but today was a perfect day to take some risk.”

“I was really thinking about my lead. With the gap at 30 seconds I was trying to take it second by second. I was trying not to push it right away to one minute, tried not to force myself. It was the best way to save my strength and put all my strength into the 50 km in front of me. I think it was the best option.”

Domination might be an overused word in sports reporting, but at times it is the only fitting description: Tom Boonen dropped the best riders in the world with seeming ease. He didn’t even leave them in his dust; the dust had settled by the time the competition arrived. The 31-year-old Belgian was a kilometer ahead of the closest pursuit when he entered the Roubaix velodrome to take his last laps and the trophy. He could have gotten off his bike and walked, and still won.

The entire peloton knew, for the final five kilometers, that they were racing for second; they probably knew 20 km from the finish, when the big Belgian had a gap of over a minute, that the race was Boonen’s.

Paris-Roubaix is one of the toughest of the One-Day Classics because of the cobblestones: 27 sections of two-hundred year-old farm roads paved with brick-sized blocks, with huge gaps between them. The pounding the bike and rider takes over the cobbles is immense, staggering; the bikes buck into the air, and the riders’ bodies ripple from the shock of each cobble.

Crashes, flats, and mechanical failures are common; the winner needs luck as well as strength to succeed. Boonen had good luck, but his strength on this day was phenomenal.

Boonen chose these toughest sections to accelerate. He didn’t try to stretch his lead on the smooth sections, where any rider could be fast; Boonen pressed hardest when the road was worst, knowing that on this day at least he was the strongest man in the race.

Sébastien Turgot of Europcar took second, winning the sprint by about a millimeter over BMC’s Alessandro Ballan. Omega Pharma-Lotto’s Nicki Terpstra, who attacked with Boonen 55 km out but couldn’t match his teammate’s pace after a couple of kilometers, held on to the others to finish fifth.

“I don’t realize yet how huge is the performance that I achieved,” Turgot told cyclingnews. “I did some track and that certainly helped me in the sprint.

“Boonen was too strong. It was almost a miracle what he did, it was super nice,” Turgot said.

Britain’s Sky Procycling team made a huge effort in the race, pushing the pace early, riding down the first breakaway, and sending four riders in pursuit of Boonen. Their reward was only fourth place; Juan Antonio Flecha didn’t fare well in the final five-man sprint for second. Neither did Lars Boom; after a puncture 20 km out dropped him from the chase group briefly, the Rabobank rider fought his way back to the front, only to get dropped again in the velodrome and finished sixth.

For Tom Boonen, who lost a couple of seasons with a shattered kneecap and a broken wrist, 2012 has been a dream season. His form has been excellent, and he has nine wins to prove it, starting with victory in the Tour of San Luis in January, and continuing through the Tour of Qatar and into the Classics. With his win today he becomes the first rider to win the double-double—the two hardest One-Day Classics, the Tour of Flanders and Paris-Roubaix, in the same season. Boonen did it in 2005, the first year he won Paris-Roubaix, and now again in 2012.

“When I look back on these two or three weeks, it’s been amazing,” Boone told velonation.com. “It’s my second double and I realize now I am the only one who did this ‘double’ two times. I realize now I am maybe the best guy to ever ride on these cobblestones, on these roads. It’s special, but I think I need some time. My career isn’t over yet.”