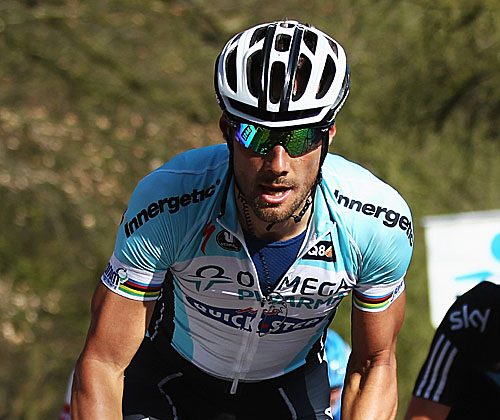 Tom Boonen of Omega Pharma-Quick Step rides in the peloton during the Gent-Wevelgem one day cycle race on March 25, 2012. (Bryn Lennon/Getty Images)
Cycling

Tom Boonen continued his amazing season by winning on his home turf in the hardest of the One-Day Classic cycling races, the Tour of Flanders Sunday, April 1.

Omega Pharma-Quickstep rider, fresh off a win in 2012 E3 Harelbeke on March 23 and Gent–Wevelgem on March 25, carried on by winning the winning the 256-km (159-mi.) race from Brugge to Oudenaarde, over steep hills and rough cobbled roads.

“I was worried about heading to the finish with those Italians,” Boonen told cyclingnews.com. “They know each other well and I feared that they would kill me, but the strong headwind was my ally. I had to count on my sprint. I started too early and didn’t have much left but it was enough.”

The win was his third in this difficult Classic race; only three other riders have managed this feat.

Boonen luckily avoided flats, mechanicals, and crashes, all of which there were plenty. Boonen’s chief rival, RadioShack-Nissan’s Fabian Cancellara, went down hard with 61 km to go. Cancellara fractured his right collarbone in three places and will need surgery to repair the damage. The Swiss champion will be off the bike for several weeks and will miss next week’s Paris-Roubaix race.

Patience as well as power earned Boonen the win. The 31-year-old Belgian rider bided his time while a 15-rider break opened a six-minute gap after 15 km of racing. Boonen didn’t join any of the groups which attempted to catch the breakaway, preferring to watch his rivals while waiting for fatigue to take its toll.

The breakaway was caught with 46 km left in the race. Several riders attempted attacks, but the high pace set by Omega Pharma’s Sylvain Chavanel and Liquigas’s Peter Sagan stifled them, eventually splitting the peloton on the way up one of the toughest climbs, the Oude Kwaremont, with about 30 km to go.

The route had changed for 2012; to make the race more spectator-friendly, the course ran three loops around Oudenaarde, including the two toughest climbs, Oude Kwaremont and Paterberg, three times. These climbs formed the perfect launching pad for attacks.

Astana’s Jacopo Guarnieri and Europcar’s Vincent Jerome bridged across, while Sky’s Edvald Boasson Hagen and Farnese’s Oscar Gatto tried unsuccessfully. This was the first serious selection of the race.

Jerome tried a solo attack, which was shut down by Nicki Terpstra, joined by BMC’s Marcus Burghardt. This group couldn’t stay away long; on the next climb up Oude Kwaremont things came together, which prompted an immediate attack by Alessandro Ballan. The BMC rider was ignored for about a minute before Boonen and Farnese’s Felipe Pozzato set off in pursuit, themselves chased by Van Marck, Sagan and Europcar’s Thomas Voeckler.

The pursuit group swelled to about ten riders, but none of them had the legs left to catch the three leaders. Boonen had marked the right move, and caught his rivals off guard. Luca Paolini made an heroic effort to bridge, but he was defeated by the cobbles of the narrow Oude Kwaremont and the steepness of Paterberg.

Boonen nearly cracked on Paterberg, but clung to the leaders, and once off the steep cobbles, never had another bad moment. Peter Sagan launched a chase on Paterberg, but it was too late; the gap grew to 26 seconds at ten km, and another 20 seconds to the peloton.

With podium spots assured for the three leaders, the only question was which would end up where? Boonen was far the strongest sprinter and Ballan by far the weakest. This forced the BMC rider to try repeated attacks, but he had no hope of dropping his rivals.

Entering into the final few hundred meters, Ballan held the lead; he slowed, trying to force a move. Knowing he was probably doomed anyway, the BMC rider then made a brave attempt, but as soon as he started sprinting, Boonen took off with Pozzato in tow. Though he had the best position, Pozzato lacked the power to match the Belgian rider, and Tom Boonen won his third Tour of Flanders by a bike length.

This was Boonen’s seventh win of the season, by far the rider’s best in several years. The win elevated Boonen to the top of the UCI World Rankings, replacing Simon Gerrans of GgreenEdge.

Omega Pharma-Quickstep continued its winning ways, getting three riders in the top ten, while BMC captured third and fourth; Greg Van Avermaet won the bunch sprint behind the three leaders.