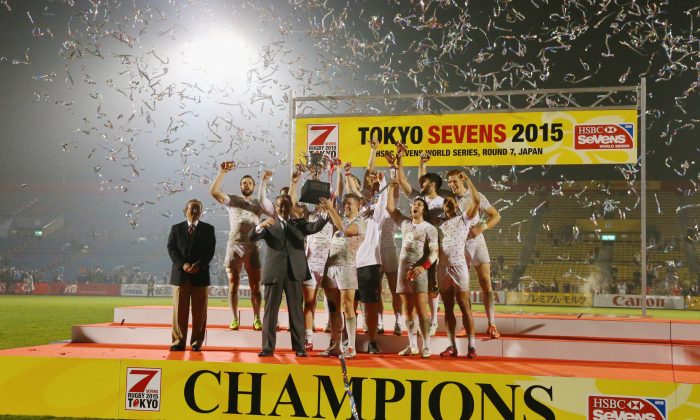 England team celebrates after winning the cup final during the Tokyo Sevens, round Seven of the HSBC Sevens World Series at the Prince Chichibu Memorial Ground on April 5, 2015 in Tokyo, Japan. (Koji Watanabe/Getty Images for HSBC)
HK Rugby Union

Tokyo: Round Seven. England Singing in the Rain

If the Hong Kong Sevens had an air of predictability with the way matches played out, the Tokyo Sevens, one week later, was anything but. Round 7 of the HSBC World Series in Japan on April 4-5, provided upsets and hope, for the teams going on to the final events in May. (Glasgow, 9th-10th, and London 16th-17th).

Fiji left Hong Kong victorious. And coming into Tokyo Australia had tightened their grip on fourth place, and with it the all-important pass to Rio. Whilst no-one has spoken about relegation, one team will make way for Russia next season, and Japan look ominously adrift at the foot of the table with only seven points (behind Portugal with 22).

Ben Ryan’s Fiji was the form team. They were only two points behind South Africa, and looked intent on dislodging them from the top of the World Series Standings. New Zealand seemed quietly confident that the team rebuild was making good progress. Other teams could all look to encouraging signs of form after the Hong Kong event; Scotland, France, the USA, Kenya and Australia all showed signs of promise, if not consistency, in Hong Kong.
Despite the training and discipline of Sevens, results are sometimes unpredictable and unexpected. Tokyo was about to underline that massively.

Having played in Hong Kong in front of a packed stadium, with 40,000 cheering on and off the pitch, it must have seemed surreal to run out in front of half-empty stands on Saturday and Sunday in Japan. If you’re a Hong Kong resident and can’t get a ticket for the Hong Kong Sevens, then Japan seems a logical addition to your calendar. The price of the entrance ticket alone in Japan helps pay for the airfare from Hong Kong!

On Saturday, only Group A played out according to seeding. There were still some close games, Fiji came through unscathed, but England narrowly beat Wales 10-7; and Wales in turn, only just edged Hong Kong 14-12. Fiji and England went through to the Cup; Wales and Hong Kong the Bowl.

In Group B, Portugal provided the shock result of the day beating Australia 12-10. Scotland also beat Australia, yet Australia later beat New Zealand 19-14. New Zealand and Scotland made the Cup. Crucially Australia did not. This has a huge bearing on the points and the race for fourth.

In Group C, South Africa won all their games and made the Cup, but only points difference ensured Canada qualified, as Canada, the USA and Kenya were all tied having lost, won and drawn each of their matches.

And in Group D, Japan provided the home crowd with great cheer by qualifying for the Cup for the first time by drawing with Argentina, and later beating Samoa. They were joined in the Cup by France, with Argentina and Samoa competing in the Bowl.

Knockout
After a dry Saturday, Sunday was played in the rain. It made handling difficult and changed the match dynamics. The close nature of the matches on Saturday continued into Sunday. The Shield final was played between Portugal and Argentina, with Portugal claiming the silverware 12-7. Both teams had close semi-finals with Portugal beating Kenya 17-12, and Portugal edging Hong Kong 19-17.

In the Bowl, Australia’s woes continued. They narrowly lost the final to the USA, 17-12, after the match went into extra time, Perry Baker scoring the winning try. Australia had sneaked past Wales in the semi-final 17-12; whereas the USA had comfortably beaten Samoa 22-5. Samoa, having impressed in Hong Kong, had a disappointing tournament in Japan.

In the Cup there was the biggest shock of the weekend: Canada beat New Zealand in the quarterfinal. It was the Canadians first victory over New Zealand, and the cheers could be heard north of the 49th parallel. The shock result even surpassed the shaving of DJ Forbes beard! Although Canada lost their semi-final to England, it made this tournament one for the Canadian scrapbook. In the other quarters, England beat France; Fiji beat Japan and South Africa beat Scotland.

The Cup final was between England and South Africa. To get there, South Africa had come from behind to beat Fiji 7-5 in the semi, and England edged past Canada 14-5. The final was tense; it was 7-7 each at half time, but two quick tries from England stretched their lead to 21-7, before South Africa scored another, to take it to 21-14. England held on to win for the first time since Wellington in 2013, and amass valuable points.

Good weekend for England
It was a very successful weekend for England, not only winning the tournament but securing 15 more points than Australia, and edging ahead in the all-important race for fourth place. England now has 100 points, Australia 91, with only two tournaments left. South Africa (129) edged to four points ahead of Fiji, (125) to lead the standings, with New Zealand comfortably in third place (120). The two bottom teams both had excellent tournaments: Japan in qualifying for the Cup now has 17 points and Portugal winning the Shield has 25. Both are closer to Kenya on 33. Russia is likely to replace one of these three sides.

Next rounds
There’s now a month’s break before the next round in Glasgow, with still much to play for. But rounds six and seven in Hong Kong and Tokyo did much to determine the end game for this season and also build confidence for teams looking ahead for the Olympic qualifying tournaments later in the year. Whereas the games in Hong Kong played to form in front of a packed stadium, Tokyo provided the upsets and opened up new possibilities for the end of season climax.