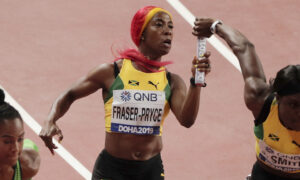 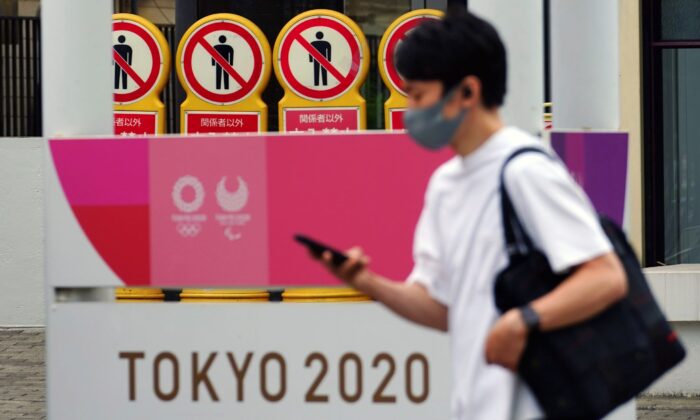 A man walks past a banner for the Tokyo 2020 Olympic and Paralympic Games in Tokyo, on May 11, 2021. (Eugene Hoshiko/AP Photo)
WORLD

Olympic organizers announced that two workers at the Olympic Village in Tokyo have tested positive for COVID-19, just over two weeks out from the opening ceremony and about a week before the village opens to athletes, according to the Tokyo Shimbun news outlet.

The village workers who tested positive last week had been dining with two other Olympics staff members, in violation of the Tokyo 2020 Organizing Committee’s pandemic countermeasures, according to Australia’s ABC.

Organizers cited by Tokyo Shimbun said that “strict precautions” have been taken to avoid a “recurrence,” noting that there are prohibitions in place around Olympics staff eating and drinking together. They added that athletes at the village will be kept isolated from outside contact and will be transported to venues by dedicated vehicles to reduce the risk of infection, but since staff come to the village from home, “the influx of viruses cannot be completely prevented.”

The Games, already delayed a year, are set to open on July 23 despite concern that an influx of thousands of people from around the world could trigger new waves of infections.

Japan has not had explosive outbreaks of COVID-19, the disease caused by the CCP (Chinese Communist Party) virus, that have been seen elsewhere, but it has seen more than 800,000 cases and more than 14,800 deaths.

To reduce the risk of infection, Japan’s top COVID-19 health adviser Shigeru Omi said on Wednesday that it was important to reduce the number of Olympic officials and others attending events as much as possible. Omi told a parliamentary health committee that COVID-19 countermeasures should be implemented “with a sense of urgency.”

Already, organizers have banned overseas spectators and set a cap on domestic spectators at 50 percent of capacity, with a ceiling of 10,000 people.

But Japan’s government is reportedly considering proposals that would ban fans from all events at the Olympics, the Mainichi newspaper reported on Wednesday, as officials scramble to address public concerns about the spread of COVID-19.

Around 11,000 Olympic athletes and 4,400 Paralympians are set to come to Tokyo for the event, along with tens of thousands of people in support roles, such as coaches, administrators, and members of the media.