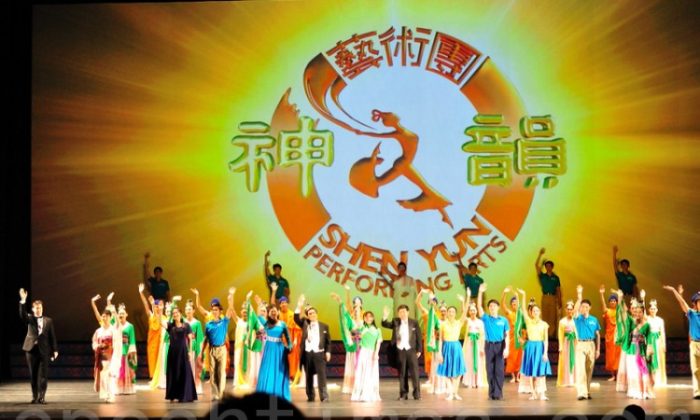 TOKYO—Shen Yun Performing Arts New York Company finally made it to its 2012 premiere in Tokyo, Japan, on Feb. 14. The Shen Yun performance scheduled in Tokyo for 2011 had to be cancelled due to the March 11, 2011 earthquake and tsunami, which swamped large areas of Japan’s northern Pacific coast.

This year’s show also encountered difficulties when the signing of the contract for the Tokyo International Forum was delayed because the Chinese Communist regime was trying to stop the show.

As such, it was amazing that attendance at the evening performance of Feb. 14 was over 90 per cent. Many celebrities in the political and artistic circles were attracted to watching Shen Yun’s all new show.

In the audience was Koga Toshiaki, councilor of the Tokyo Metropolis, accompanied by his wife. Commenting on the magnificence of the performance, he said that he was especially impressed with the vivid, animated backdrops. Mr. Koga said, “The backdrops made the audience have the feeling of three dimensions, and that was the most wonderful part of the show.”

It was the third time that Mr. Koga had seen Shen Yun, and he said he has come away each time with a different feeling from the performance. He said last time he felt that Shen Yun seemed to have extraordinary strengths, and this time, he was totally amazed by the magnificent backdrops. He emphasized that he has never seen such a wonderful performance like Shen Yun.

He added, “Once the curtains opened, the beating drums were overwhelming. And as for the program depicting the joyful little monks, the dancers’ skills were especially fantastic. All the programs were really spectacular.”

Standing by his side, his wife said excitedly, “Every program is indeed great. They are wonderful.”

Seeing the show for the second time, Mrs. Koga said, “The lively backdrops made the audience feel as if the performers were really walking from the backdrops. It was really amazing.”

As a Tai Chi practitioner, she said that she could understand the hardships these dance performers must go through, as it is impossible to have such a wonderful synchronization between the performers and the backdrop, without repeated, painstaking rehearsals.