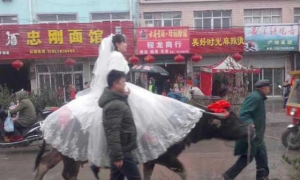 Three-time champ Susan Brennan from Michigan was once again named the winner with her 1920’s inspired gown and won $10,000 U.S. dollars. She used 20 rolls of toilet paper, clear tape, glue, and thread.” Brennan wanted to create a dress with a lot of beads and lace. She made it so then she can pull off the skirt, making it a romantic flapper dress. With her mother’s help she called it “Romance On a Roll”.

2ed place winner Katrina Chalifoux from Tennessee won $5,000 for her dress. She used 28 rolls of toilet paper to make the two piece gown. Model Stephanie Pope said that she would wear the gown as her wedding dress, since it is light and easy to walk in.

3ed Place winner Amber Mills from Texas created a vintage dress dating back to the 1970’s. Mills won $2,500 for her Blue Charmin vintage gown. She is a stay at home mom who entered the contest in hope to supplement her family’s income. She is very thankful to help her family out after she had won the competition.