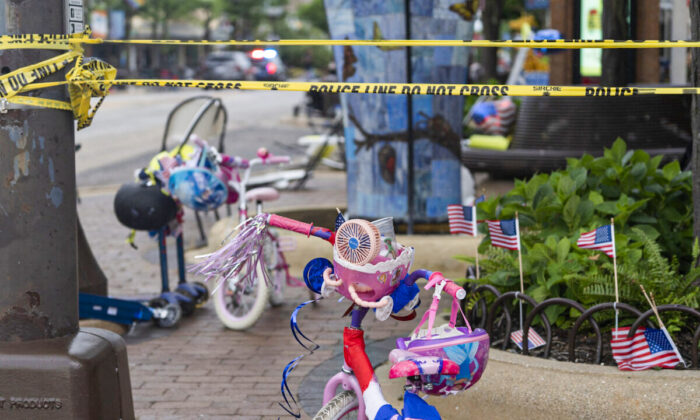 Police crime tape is seen around the area where children's bicycles and baby strollers stand near the scene of the Fourth of July parade shooting in Highland Park, Ill., on July 4, 2022. (Youngrae Kim/AFP via Getty Images)
US News

A 2-year-old boy was left orphaned after both of his parents were killed in Highland Park, Illinois, in a mass shooting that killed seven people in total and injured more than 30 others.

Kevin McCarthy, 37, and his wife Irina McCarthy, 35, died at the scene of a Fourth of July parade in the Chicago suburb when a gunman on a rooftop opened fire on the crowd.

The couple’s child, Aiden McCarthy, was found under his father, according to Lauren Silva, who was at the scene, reported The Daily Beast.

“My boyfriend handed me this little boy and said he was underneath this father who was shot in the leg,” Silva told the outlet. She said her boyfriend later told her that the father had passed.

Silva later told The New York Times that first responders informed her they were unable to stop the father’s bleeding and had covered him with a blanket.

A GoFundMe account has been created to raise funds for the toddler’s future care.

Irina Colon, the organizer of the page, said it was created on behalf of Aiden’s family and with their permission.

“In the aftermath of the Highland Park, IL shootings on July 4, the North Shore community rallied to help a boy who we knew nothing about. We took him to safety under tragic circumstances, came together to locate his grandparents, and prayed for the safety of his family,” she wrote on the page.

“At two years old, Aiden is left in the unthinkable position; to grow up without his parents. … Aiden will be cared for by his loving family and he will have a long road ahead to heal, find stability, and ultimately navigate life as an orphan. He is surrounded by a community of friends and extended family that will embrace him with love, and any means available to ensure he has everything he needs as he grows.”