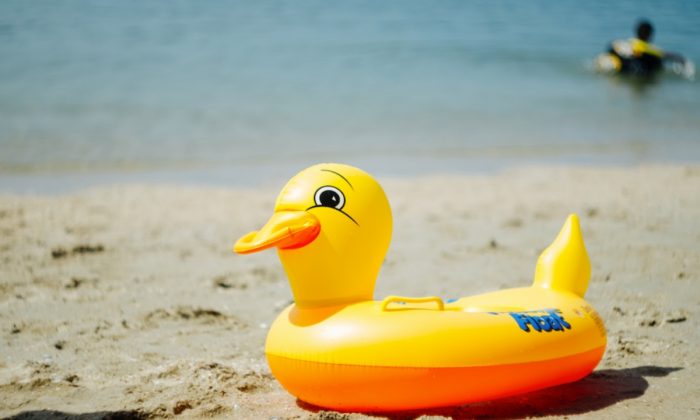 Stock image of a floating duck. (Jeerayut Rianwed/Shutterstock)
US News

Toddler on Floating Duck Carried Away by Strong Winds into Lake, Rescued by Boaters

A toddler on an inflated duck was carried away from the shore by strong winds on Lake Michigan and had to be rescued by boat on July 15.

The child’s mother lost hold of the inflatable and the duckie drifted away. The boy was seconds away from drowning when he was rescued by water safety expert Dave Benjamin. Benjamin used his paddleboard to reach the child, reported the Daily Mail.

According to News Dispatch, Benjamin is the executive director of the Great Lakes Surf Rescue Project.

Benjamin and his family were at the Washington Park beach when the incident happened.

“We noticed a woman in waist to chest-deep water with two young children on an inflatable duck,” Benjamin told the News Dispatch. “Both children were wearing cheap inflatable arm floaties.”

Benjamin said one child fell off into the water and the mother turned around to grab him. By that time, the toddler’s inflatable had drifted away.

“When she turned back to grab the duck, it had drifted away. It was drifting farther and faster than she could swim after it.”

He said everything was happening very fast. “I figured this is going really bad, really fast,” Benjamin told NBC Chicago.

“He is being very active, moving, you know—crying and then he fell off and now I’m just like, you know we have got seconds if those floaties don’t keep him up,” he said.

Benjamin started yelling to catch the attention of a nearby boat, according to News Dispatch.

The Great Lakes Surf Rescue Project, Inc. is reporting 2018 as the deadliest year for drownings in the Great Lakes since 2010 and they say almost all drownings are preventable https://t.co/RYkCP5fSU0

He told NBC Chicago that the boy was in “drowning posture” when a woman in a life jacket from another boat saved the child.

“If that boat wasn’t there, there is a strong likelihood that, that toddler could have submerged,” he said.

Lake Michigan is the deadliest of the Great Lakes, report says: https://t.co/PGR7hI3Pzj pic.twitter.com/Agaayde1MM

ABC57 reports that Lake Michigan is the deadliest of all lakes in the United States. From 2002 to 2018, 400 incidences of both drowning and rescue were reported in the lake.

A report “Keeping Kids Safe in and Around Water” (pdf) by Safe Kids Worldwide says that 800 children die due to drowning every year in the United States and about two-thirds of these deaths happen during May-August.

Most parents think that if a child is drowning they would hear it. But the reality is drowning can be very silent and there may be “very little splashing, waving, or screaming.”

Check out our tips to help keep kids safe whenever they’re in or around open water. https://t.co/Xlp3X01Lde pic.twitter.com/9ynjKU0cIj

The report says one out of three parents have left their children alone in the pool for two or more minutes. The reality is drowning can be very quick and a child may drown in less than a minute if not rescued.

More than half of the parents surveyed think that a lifeguard is only responsible for the child’s safety in the water. Whereas Safe Kids Worldwide says it’s parents responsibility to make sure their child is safe. “A lifeguard’s job is to enforce rules, scan, rescue, and resuscitate,” the report said.

About 60 percent of the parents reported they do not need to worry if their child had swimming lessons. “Swim lessons are essential, but skill level varies. A review of children who drowned in a pool revealed that 47 percent of 10–17-year-olds reportedly knew how to swim,” the report said.