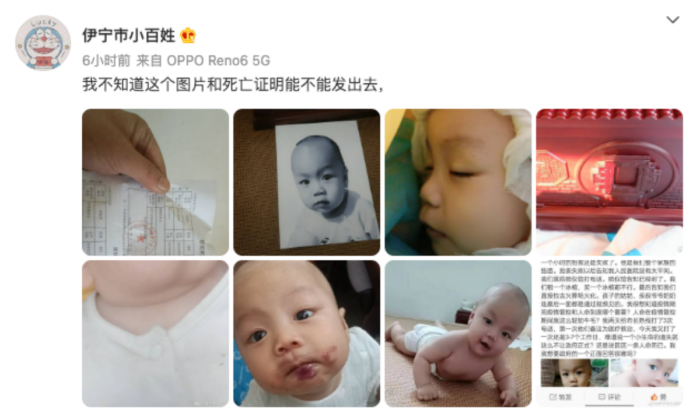 The tragic death of a 17-month-old boy in Yining city last month has caused outrage on Chinese social media. The boy’s father accused the local hospitals of negligence, and netizens criticized authorities for their strict COVID-19 lockdowns.

Yining—a city in China’s western Xinjiang region—had been under complete lockdown since July 30, when authorities reported 10 asymptomatic cases. According to online posts from various residents, the city sealed up all residential homes to contain the spread of COVID, and local hospitals stopped treating children.

Yining resident Liu Long told the Chinese language edition of The Epoch Times on Sept. 10 that he wants to seek justice for his late son, Xuyang.

“The deputy party secretary came to our home on Aug. 18, after I wrote about my son’s death online. He said that they would carry out an investigation if I removed my post. But over 20 days have passed, and there has been no progress. Are they afraid of shouldering the responsibility? Or are they afraid of losing their jobs?”

Liu said the authorities took his post down within three minutes.

Netizens blasted the local authorities and hospitals for disregarding people’s lives, and they reposted the father’s remaining comments on more prominent social media platforms to support him.

Liu blamed the local hospitals for their negligence and failure to save his son.

“Home quarantine began on Aug. 1. We have been locked in since then. I live in a house with its own courtyard, which was locked from the outside [by the local authorities],” he told the publication.

He said Xuyang had some symptoms of indigestion for two to three days, but he ate as usual and didn’t have a fever.

“I immediately called the emergency center, but they said none of the hospitals would treat patients. They asked me to try my luck by calling individual hospitals,” he said.

The emergency center in each city is under the administration of the local health committee. The center is responsible for taking medical emergency calls and coordinating the dispatch of ambulances to take patients to the nearest hospitals.

Liu told the publication that he had called almost all the major hospitals in the city. “The calls were either unanswered, or the number was inactive, or the hospitals didn’t treat children.”

He had no choice but to call the police, who eventually arrived with the local community committee’s Chinese Communist Party (CCP) secretary.

However, they didn’t offer him any help. Then Liu called the emergency center again in front of the police and CCP secretary, but the center still insisted that he should contact the hospitals on his own.

In a desperate attempt, Liu took his son to the nearest medical center—a five-minute drive from his home.

“I saw the baby was getting worse, and I just dashed into the community committee’s car with the baby and forced the driver to take us to the nearest hospital,” he said.

Upon arrival, the hospital asked them for negative PCR tests before admitting Xuyang.

“I just ran into their room and put my baby on the first aid cart, but the medical staff by my side just kept telling me: ‘Go pay the fees, pay, pay, pay!'”

Then at 5:05 a.m. on the same day, the hospital announced that the boy had died of “septic shock,” according to Liu.

“The hospital said that if I had come 10 minutes earlier, it would have been totally different for the baby,” he said as he teared up.

The local funeral home was closed due to the lockdown, and the hospital rejected Liu’s request to use its mortuary. So he sat in front of the hospital gate, with his son’s body in his arms, waiting for three hours for the crematorium’s vehicle to pick them up.

“The crematorium told me that the child was too small to have ashes,” he said. “From 3 a.m. to 9 a.m., from resuscitation to cremation, only six short hours, and my baby is gone forever.”

Another parent whose child died from an illness during the lockdown posted online, urging parents to “call the police directly,” as “none of Yining’s hospitals accept children for emergency treatment,” according to China Digital Times.

The Epoch Times contacted Yining People’s Hospital and the Yining municipal health committee for comment on Sept. 10 and Sept. 12.

The boy’s mother currently lives and works in Shenzhen, China’s southern city bordering Hong Kong. She could not return home to be with her son due to Yining’s strict lockdown measures. The news devasted her.

“I am 30 now. If my wife comes back, she will divorce me. She cannot come back now because of Xinjiang’s lockdown measures,” the father said. “She called me, saying that she left the baby in good health with me less than two months ago; she couldn’t accept it [son’s death].”

Liu said his 76-year-old father had been crying over the boy’s death. They haven’t shared the tragic news with Xuyang’s grandmother due to her poor health.

China Digital Times, an independent media organization based in Berkeley, California, had retained some posts by Yining residents asking for help before the authorities removed them.

Liu uploaded posts on Chinese social media in August and September, and two posts were archived by China Digital Times.

Liu first posted on the evening of Aug. 16, after his son was cremated, airing his grievances. His post was removed within minutes.

He posted again on Aug. 17, Sept. 8, and Sept. 9, with photos of Xuyang and the death certificate issued by the hospital.

His latest post, though not removed, was not accessible for reposting.

Chinese netizens wanted to help Liu by commenting, posting, and reposting his posts. Some blasted the authorities for their draconian lockdown measures.

The following are some netizens’ comments:

“He [Xuyang] was so adorable and so innocent! How can such a young life become a victim of the so-called pandemic? How can we protect children born in such a dark environment till they grow up safely? I now begin to regret that I have given birth to my baby! I fear that I can’t protect him!!!”

“This is a complete disregard for human lives!”

“This is against humanity. History will judge them.”

“Help with reposting! We, ordinary people, demand an explanation! Is it true that everything will be fine if you don’t die from COVID-19? Someone needs to be held responsible, and someone needs to pay the price!”

“From Shanghai in May to Xinjiang now, when is it [the lockdown] going to end? Which place will be the next [to be locked down]? The pandemic isn’t scary; what humans do is most frightening.”

Yining’s municipal pandemic control and prevention command announced on Sept. 12 that 88 communities have lifted some lockdown measures “in an orderly manner.” Each household will be given a temporary passport, which allows one family member to run errands within their community, and all entrances and exits will be closed and guarded 24 hours a day, according to a statement from the authorities.

Gu Xiaohua and Xia Song contributed to this report.