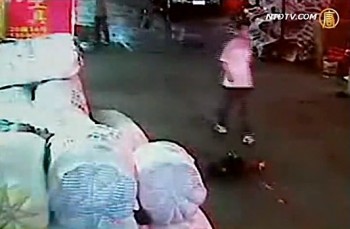 A man walks around Yueyue seconds after she had been run over by a mini-van. (Screenshot NTDTV)
China

Sophia Fang
View profile
Follow
biggersmaller
Print
UPDATE: Little Yueyue, the 2-year-old Chinese girl whom 18 people passed by after she was crushed under the wheels of two cars on Oct. 13, died in the early morning of Oct. 21.

In an alleyway in Foshan City in southern China’s Guangdong Province, 18 passers-by failed to help a two-year-old girl who was twice struck by hit-and-run drivers. A woman who was scavenging trash eventually came to the child’s aid, and the little girl is now clinging to life in an intensive care unit.

Late in the afternoon on Oct. 13 Yueyue was playing in an alley near the hardware store run by her parents. What happened to her was captured by a closed circuit TV camera.

As she walks down the alley a white minivan knocks her down, with the right front wheel going over her small body. The van stops just before the rear wheel runs over her, rocks backward slightly as the driver takes his foot off the brake, and then surges forward, with the right rear wheel running over the little girl and coming back down to the pavement with a hard thump.

Seconds later a man in a white short-sleeved shirt manages to walk around Yueyue’s body without seeming to look at her. A man on a scooter drives around her, with the driver looking back over his shoulder at the young girl. Another pedestrian takes a wide berth around her.

Then, approximately ten seconds after the first truck had run over her, a pickup truck drove over Yueyue without even slowing down, with both the right front and rear wheels rolling over her.

Four scooters, three cars, and three pedestrians, including a lady with a little girl about five to six years old, then passed by. Passersby could be seen taking one look at the small, bloody, motionless body and then leaving without stopping or calling the police.

Seven minutes after Yueyue had first been struck, a woman who appeared to be scavenging trash arrived at the scene. She threw her big sack to the ground, tried helping the girl to sit upright, and then pulled her out of the center of the alley, while crying for help.

A few seconds later, the girl’s mother appeared in the video frame, and Yueyue was rushed to the emergency room.

The woman who was scavenging trash is 58-year-old Chen Xianmei. She told Guangzhou Daily that she saw a child lying on the ground. Without much thought, she went up to help. “This is nothing unusual,” she said.

Chen told New Express Daily that after she picked up the toddler, she called out for help. People inside the nearby stores answered her by saying “I don’t know who that is,” or “she is not your child, why bother.” There were other passers-by also, but no one answered her calls for help, Chen said.

When asked whether she was afraid of being framed by the victim, Chen told the Guangzhou Daily: “I am not afraid of that. Whenever I see older people fall down, I would go to help them. There has to be someone who is willing to help.”

To New Express, Chen said, “I pick up trash, so who am I afraid of?”

When Yueyue’s parents met Chen, they knelt down in front of her and cried, “Thank you for saving our daughter.” Chen was also crying, according to New Express.

Yueyue is now in intensive care in the General Hospital of Guangzhou Military Command. At around noon on Oct. 17, Doctor Wen, deputy director of the ICU told New Tang Dynasty (NTD) TV that “The function of her brain stem has not recovered yet. She is still in extremely critical condition. She will be kept in observation for 7 to 10 days to see if the treatment works. The most important thing is for the patient to breathe on her own and for brain function to be restored.”

The two drivers were arrested. Yueyue’s father, Wang Chichang, told NTD that he watched the entire footage from the surveillance camera and felt desperate.

“The first driver simply said that it would cost a little over 10,000 yuan [US$1,568] if he killed someone,” Wang said. “When the driver was interviewed, he admitted to knowing that a child was hit by his van. But he kept driving. He wanted to kill my daughter. That’s obvious.”

The video of what happened to Yueyue has been widely posted on the Internet, and people are shocked.

A local TV news anchor said, “If the three people who walked by after she was crushed by the first van had picked her up, Yueyue’s condition would not have been so bad.”

Commentators have already begun speculating on the significance of what happened to Yueyue in the alleyway.

Voice of America quoted a critic saying that the failure to help Yueyue is "a political, not a cultural, phenomenon. It is the result of the ruling Communist Party’s consistent suppression of righteousness, sympathy and kindness through political and legislative means."

According to Guangzhou Daily, people have been criticizing the woman who helped the little girl saying that “she just wants to be famous.”

Upon hearing this comment, Chen was heartbroken, “why is it so hard to be a good person?”

The regime’s news media has a directive to “lead the public opinion in a positive direction, trying to depict a modern day China filled with people of high morality.”

The state-run Guangdong Jinyang Network published an article on Monday titled “Little Yueyue’s Mother: ‘There Are So Many Nice People in This Society.’”