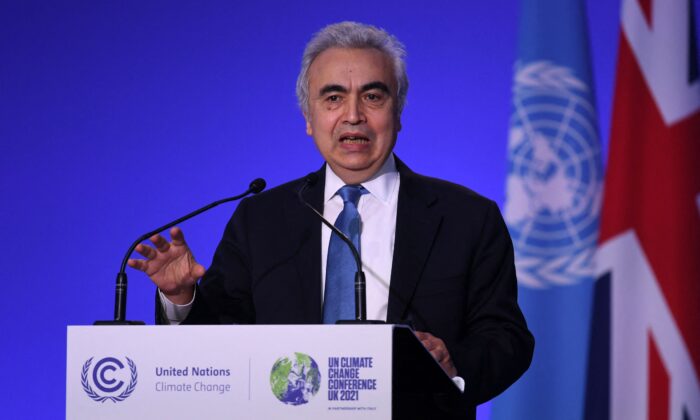 Executive Director of the International Energy Agency, Fatih Birol addresses a session on day five of the COP26 UN Climate Summit in Glasgow on Nov. 4, 2021. (DANIEL LEAL/AFP via Getty Images)
By Emel Akan

The head of the International Energy Agency (IEA) has cautioned that the current energy crisis is “much bigger” and could persist longer than the oil shocks of the 1970s.

In the 1970s, there were two significant oil shocks that caused inflation to spiral out of control in the United States.

“Back then, it was just about oil,” IEA Executive Director Fatih Birol said in an interview with German daily Der Spiegel. “Now we have an oil crisis, a gas crisis, and an electricity crisis simultaneously.”

As a result of the war, Western countries are imposing increasingly severe sanctions on Moscow, which, according to Birol, will produce greater supply constraints this summer.

“When the main holiday season starts in Europe and the U.S., fuel demand will increase, then there could be shortages: for example, with diesel, petrol or kerosene, especially in Europe,” he said.

Russia, a leading supplier of oil, natural gas, and coal, accounts for almost 36 percent of the European Union’s oil imports.

On May 31, EU leaders agreed to a partial ban on Russian oil imports by the end of 2022 as part of the sixth sanctions package against the Kremlin. With the new plan, the EU will be prohibiting almost 90 percent of Russia’s oil imports to the bloc.

Oil prices have soared since the announcement, as the world scrambles to replace Russian production.

In the United States, gasoline prices hit a new record on May 31. Prices at the pump jumped to a national average of $4.622 per gallon, up from $4.598 a week ago, according to AAA.

“In the past 50 years, the strategic reserves have only been used five times, twice in the last few months. This shows how deep this energy crisis is,” Birol said.

During the 1973–74 oil crisis, developed nations recognized they were unprepared to deal with the oil embargo enforced by major oil producers, which drove prices to record highs. The IEA was founded to assist its members in responding to major oil supply disruptions.

In March, the IEA presented the advanced economies with a 10-point plan for reducing their oil use within a short period of time, Birol said.

During the Spiegel interview, he also criticized the German government for its decades-long dependence on Russian energy.

“As early as 2004, we warned the government that Germany was becoming too dependent on Russian natural gas,” Birol said. “And we also pointed out this problem during the years of the Merkel government. But Russia’s share of gas imports continued to grow.”

In an interview with Bloomberg last month, oil historian Daniel Yergin also said that today’s energy crisis is “potentially worse” than the 1970s, with repercussions not only in the oil sector but also in the natural gas and coal industries.

The two major oil shocks in the 1970s were triggered by the Arab–Israeli War in 1973 and the Iranian Revolution of 1979. These shocks caused large reductions in the supply of energy.

Inflation in the United States was already high at the time, but the twin oil crises pushed it into the double digits. The oil crisis taught the United States numerous lessons, one of which was to place a greater emphasis on minimizing foreign oil dependence.

Some analysts warned before the Ukraine War that rising gas prices were reminiscent of what happened with oil in the early 1970s.

“As the globe tries to further wean itself off fossil fuels, we could have more energy shocks over the course of this decade,” Deutsche Bank analyst Henry Allen wrote in a report last fall.

The recent EU oil ban may cause the price of gasoline to remain elevated in the United States, according to Phil Flynn, an energy analyst at the Price Futures Group.

“Oil prices continue their biggest run in over a decade as we don’t have enough of anything and we are going to have less,” he wrote in a report.

“We are short of refining capacity, and now Europe will be short crude as they move forward on a Russian oil ban.”

According to a recent study from the North American Electric Reliability Corp. (NERC), many parts of North America are at risk of blackouts this summer.

Extensive summer blackouts are expected because of idled power facilities, supply chain problems, and extreme heat. The report warned that increased demand would strain the electricity supply across a significant portion of the United States and Canada, from the Great Lakes to the Midwest.