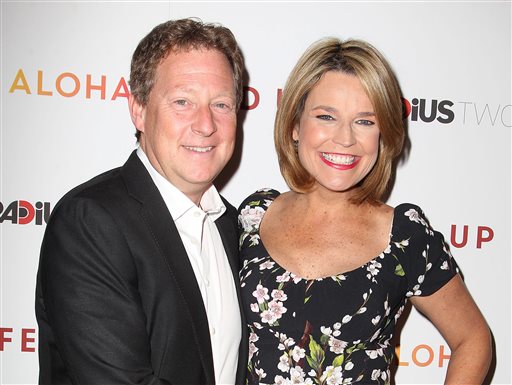 Michael Feldman (L) and Savannah Guthrie at the premiere "Fed Up", at The Museum of Modern Art in New York on May 6, 2014. (AP Photo/Starpix, Amanda Schwab)
Entertainment

Guthrie’s co-host Matt Lauer made the announcement on the air Friday morning . Lauer says Charles Max Feldman was born at 8:59 a.m. Thursday and weighed in at a healthy 9 pounds, 8 ounces. Charley, as he will be known, is named after Guthrie’s father. The middle name comes from the grandfather of Guthrie’s husband, Mike Feldman.

Lauer has already visited Guthrie in the hospital and joked that he “was called in to bring wine.”

Guthrie’s pregnancy made headlines in June when she announced that she would be skipping the Rio Olympics due to fears over the Zika virus.

Feldman and Guthrie also have a 2-year-old daughter, Vale.