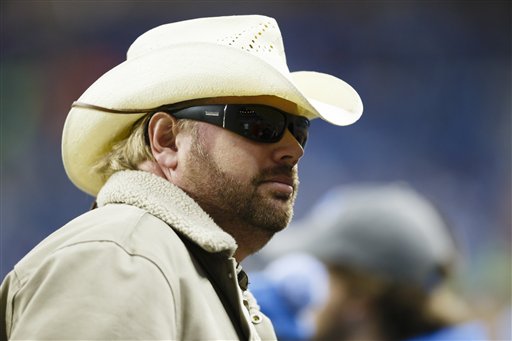 Country singer Toby Keith on the sideline before an NFL football game between the Detroit Lions and the Chicago Bears in Detroit, Sunday, Dec. 30, 2012. Authorities say a man attending a Keith concert in New Jersey climbed a fence into a nearby housing complex, waved a Confederate flag and shouted racial slurs at residents. (AP Photo/Rick Osentoski)
Entertainment

Toby Keith has announced that he’s going to perform at President-elect Donald Trump’s Inauguration Day after several singers have pulled out.

Italian tenor Andrea Bocelli, Paul Anka, and Jennifer Holliday said they were forced to pull out for various reasons.

Keith has received some criticism online for performing for Trump on Jan. 20, but he has a different reason.

“I don’t apologize for performing for our country or military,” Keith said in a statement, according to EW. “I performed at events for previous presidents [George W.] Bush and [Barack] Obama and over 200 shows in Iraq and Afghanistan for the USO.”

Toby Keith, 3 Doors Down to Perform at Trump Inauguration

There has been speculation that artists Garth Brooks, KISS, Kanye West, Marie Osmond, as well as R. Kelly would perform, but they’re not scheduled.