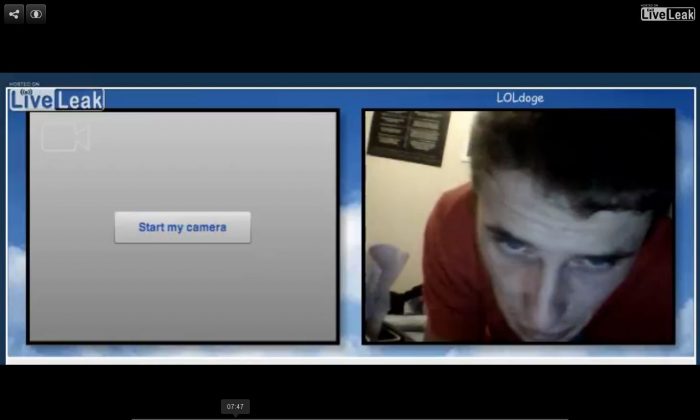 A 4chan user, LOLDoge, who went by the name “Stephen,” apparently attempted suicide in front of as many as 200 users online.

UPDATE: The person in the video has been identified as a student at the University of Guelph in Ontario. A spokesperson with the university said that the incident took place on campus.

“We were suspicious the fire had been started by the student but the police began investigating. When videos started circulating yesterday (Sunday) meetings were called with university staff and students and counsellors brought in to be available to any students as obviously it’s a disturbing situation. We are also advising students not to watch or share the video. We’re trying to take it down but it’s on so many guerrilla sites it’s almost impossible to do that,” the spokesperson said.

It is unclear if the student’s name is actually “Stephen.” Some users on the 4chan claimed he had a completely different name.

Another spokesperson said that the student is in the “hospital and he’s going to be okay,” the Daily Mail reported

According to the National Post, the university is working to remove the video.

The Daily Dot reported that he livestreamed his attempt on Chateen, and he ingested a bottle of pills, drank vodka, and then used a toaster to light a fire in his room.

He then crawled under his bed before smoke filled the room.

“Stephen,” who had the handle LOLDoge, said he’s “been on 4chan since 2004,” and “I thought I would finally give back to the community. I am willing to an hero on cam for you all.” The term “an hero” means commit suicide.

The video of the suicide attempt is available on LiveLeak and other websites, and it shows smoke filling the air before firefighters rushed in and took him away.

4chan is an imageboard in which users post anonymously. He posted his farewell message on the /b/ board that includes extreme content such as pornography and gore.

During the apparent suicide attempt, a number of /b/ users were attempting to watch the stream. Afterwards, he was dubbed “Toaster Steve.”

“Let’s all of us use his photo as wallpaper for one week. He’s doing it,” one wrote. Another added: “Leave someone so we can join.”