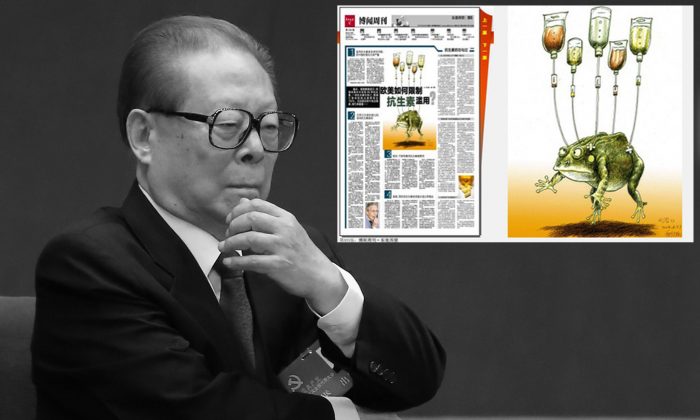 Background: Former Chinese Communist Party head Jiang Zemin attends the opening session of the 18th National Congress at the Great Hall of the People on Nov. 8, 2012, in Beijing, China. At that Congress Xi Jinping, who has pursued members of Jiang's faction with corruption charges for 20 months, was installed. (Feng Li/Getty Images) Top right: The front page of the Aug. 30, 2014, Yangcheng Evening News is seen next to a close up of the toad cartoon. Netizens interpreted this front page as mockery of the former Communist Party leader Jiang Zemin. (Epoch Times)
China

When is a picture of a toad not just a toad? When it mocks former Chinese leader Jiang Zemin
By Zhou Xiaohui

Zhou Xiaohui
Zhou Xiaohui is a former college professor. He has been contributing commentaries to The Epoch Times on Chinese politics, history, and culture since 2009.
View profile
Follow
biggersmaller
Print

An article in a local paper in southern China about antibiotic use in the United States and Europe has inspired netizens to gloat over the declining fortunes of former Chinese Communist Party leader Jiang Zemin.

The front-page article “How Europe and America Limit the Overuse of Antibiotics” in the Aug. 30 edition of the Yangcheng Evening News was illustrated with what seems to be a complete non sequitur: a cartoon of a toad with its eyes rolled back and receiving multiple IVs. The cartoon dominates the page, filling the middle three columns and extending from the top of the page to below the fold, or over half the length of the page.

Welcome to the coded communication that often appears in China’s press. China’s netizens had no difficulty in decoding what they believed the illustration showed.

A netizen with the nickname amico responded to the article on a BBS based outside China, “this is a direct challenge to the old Jiang.”

For years, Jiang Zemin has been referred to as a “toad” by Chinese netizens, partly because of his close resemblance to the animal, and partly because netizens need nicknames for officials in order to evade censorship.

A tool called Weiboscope that is run by the Journalism and Media Studies Centre at the University of Hong Kong makes available posts on the twitter-like platform Weibo inside mainland China that have been censored.

A netizen with the user id “Director Gao Xiaojian” related how Jiang’s father had been a traitor to China, working as an official in the Japanese puppet state of Manchuria. The post also told of a treaty with Russia in which Jiang signed away China’s rights to a large tract of land, making Jiang, in the view of the netizen, a greater traitor than his father.

Another netizen with the user id “Extreme Fireball 1” referred to an incident in March 1999 when Jiang shocked his hosts in Vienna by sitting down to play a treasured antique piano that had been owned by Mozart.

A netizen named “Learn Fa and Be Compassionate3” charged Jiang with, among other things, “[getting] to where you are [politically] by standing on the blood of others.”

Jiang Zemin is responsible for launching the now 15-year-old persecution of Falun Gong. Researchers into forced organ harvesting in China say that tens of thousands of Falun Gong practitioners have been killed for their organs since the persecution started.

The Yangcheng News article followed hard on the heels of two Aug. 30 articles about Jiang Zemin’s health. The Japanese website Tokyo Web reported that Jiang was hospitalized in a Shanghai hospital with bladder cancer.

The Seoul Broadcasting System then introduced a political element into the story of Jiang’s hospitalization with an article explaining that the former Party leader had been psychologically traumatized by the news on July 29 that Zhou Yongkang was being investigated by the Chinese Communist Party (CCP).

Zhou, a long-time stalwart of Jiang’s faction and formerly one of the most powerful figures in the CCP, has been the highest-ranking official taken down in Xi Jinping’s 20-month long anti-corruption campaign. That campaign, in addition to attacking corruption, has been rolling up the networks of associates allied with Jiang Zemin.

Given this background, it does not seem accidental that the toad cartoon appeared in the Yangcheng Evening News. It is published in Guangdong Province where Hu Chunhua, who is considered a close ally of Xi Jinping, heads up the CCP.

The cartoon seems to allude to Jiang’s political fate by the placement of the Chinese character “zhi” in the lower right-hand corner. When “zhi” is used in combination with the character “zheng,” it has the meaning of being chastised or cracked down upon.

This summer Jiang has seen, in addition to the formal investigation of Zhou Yongkang, the purging of powerful close allies such as: the former number 2 man in China’s military, Xu Caihou; the number 2 man in the Public Security Ministry and head of the office responsible for persecuting Falun Gong, Li Dongsheng; and the former top oil executive Jiang Jiemin.

In the last few weeks, Jiang has seen Party central’s inspection teams fan out over his political stronghold of Shanghai. His close associate Wang Zongnan, the chairman of Bright Foods, is being investigated, and Jiang’s associates at the automobile plant at which he worked as a young man are being questioned, as well as his associates at the Shanghai branch of the Chinese Academy of Sciences.