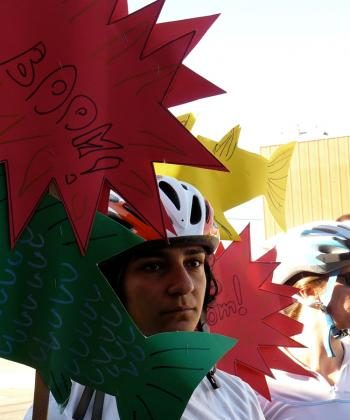 Documentary Spotlight: ‘To the Tar Sands’

This is the setting for To the Tar Sands, a low budget documentary that screened at the Calgary International Film Festival last Sunday. Focusing on nineteen young environmentalists that travel over 800 miles from the tip of southern Alberta to the enormous oil sand projects in the north of the province which cover a land mass the size of the state of Florida.

Shot by young Vancouver resident Jodie Martinson who’s currently pursuing her Masters of Journalism at the University of British Columbia, the film follows the environmentalists as they travel from small town to  town asking people the same question, “How has the tar sands boom affected you?”

“I cycled along with the cyclists and filmed it right off the back of my bike for the most part, except until the end when my bike broke down,” said Martinson in a question and answer session after the screening.

“I think it was a really interesting way to make a film and probably something you can only do once with the amount of energy people have.”

As the cyclists proceed on their journey asking people the film’s pivotal question, the one answer that is repeatedly voiced is that their lives are essentially dependant on the oil industry for work. The film reveals that residents feel dependent on an industry that is leaving a mess for future generations to deal with.

The tour comes to a head as the group finally arrives at “upgraders alley,” an enormous expanse of industrial machinery, and the smoke and environmental destruction that comes with it. When interviewed, residents in the area are especially fearful of their health, as people in their communities who had never smoked a day in their life began to be diagnosed with lung cancer.

When the cyclists arrive in the heart of the area’s oil industry, the scene cuts to an interview with one of the cyclists . He describes a conversation with a friend who works as a security guard in the area. Supposedly, his company circulated a memo to regard the film making cyclists as “terrorists.”

Interestingly, the cyclists are unable to arrange a single interview with any representative from the local oil industry despite repeated attempts.

To the Tar Sands is a documentary that is not without a sense of humor or irony. As the credits roll, the cyclist’s resident guitar player, and the film’s music supervisor Keelan Gell, recounts an experience he had with the local police in Fort MacMurray.

While he was relieving himself on a building for non-protest related reasons, he was apprehended by a police officer who was driving an SUV. The officer gave him a citation under the Environmental Protection Act for “Illegal Disposal of Waste.” The significance of this irony was not lost on the Calgary audience which filled the theater with laughter.

For more information on To the Tar Sands you can check out their Website at www.tothetarsandsfilm.ca