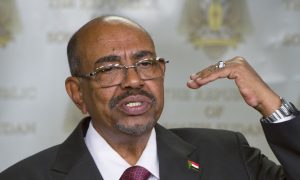 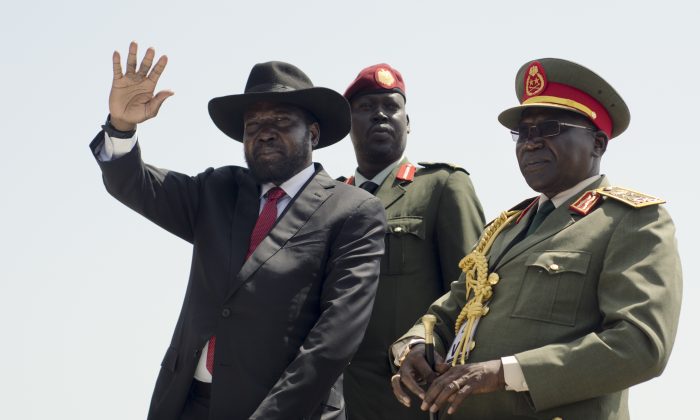 South Sudan's President Salva Kiir (L) accompanied by Army Chief of Staff Paul Malong Awan (R) during an Independence Day ceremony in the capital Juba, South Sudan, on July 9. South Sudan marked four years of independence from Sudan on Thursday, but the celebrations were tempered by concerns about ongoing violence and the threat of famine. (Jason Patinkin/AP)
Opinion

It’s cruel and dishonest to call South Sudan a failed state whose people have little to celebrate on their fourth Independence Day, which passed by earlier this July. The failure is one of state building—and of building the wrong state.

After years of bitter internecine conflict in the country, those same international governments and agencies pronouncing South Sudan kaput share responsibility for this failure with South Sudan’s current government.

The United States and other countries sent immense resources to South Sudan’s generals-turned-statesmen, seeking to prevent another war with Sudan or, worse yet, a Somalia-like environment for terrorists. They couldn’t or wouldn’t see that many of those generals, possessed of a lust for power, were still at war with Sudan-sponsored militias. Soldiers in the South Sudanese army, meanwhile, were becoming ever more impatient for the peace and prosperity promised after decades of bloodletting.

A peaceful and stable South Sudan is still within reach, if South Sudanese civil society groups are assisted in building on their existing social, economic, and democratic activities.

Whatever the donors intended, too much money went into political coffers, military hardware, and infrastructure for the oil industry.

Then-Secretary of State Hillary Clinton explained the international community’s tolerance for this mismanagement in 2012. “A percentage of something is better than a percentage of nothing,” she said, meaning that a minimally functional but increasingly kleptocratic and authoritarian-leaning government was better than the violent turmoil another U.S.-backed intervention had just unleashed in Libya.

Who will stand behind that reptilian zero-sum logic today, as lives and property are destroyed throughout South Sudan by the private armies of those seeking the biggest share of the country’s oil revenue? If the wasted scientific, cultural, and economic potential isn’t chilling enough, there’s also the threat of incubating the next Lord’s Resistance Army, Boko Haram, or Ebola strain.

Despite all these mistakes, a peaceful and stable South Sudan is still within reach, if South Sudanese civil society groups are assisted in building on their existing social, economic, and democratic activities.

South Sudan’s social entrepreneurs are bold, earnest risk takers who could team up with their peers in the United States to meet their country’s needs for food, education, and medical care. They can bring new goods and services to the global market and drive East Africa’s economic development. But they first need improved access to investment, mentors, and equipment.

Representatives from South Sudan’s myriad ethnic groups are already organizing their own peace conferences, not just for everyday disputes but even the ongoing civil war. Their consensus could be far more binding and authoritative than any ephemeral agreement negotiated by the warlords.

South Sudan’s civil society could accomplish even more if the international community supported the creation of a new national constitution and a mandate allocating oil revenue to necessities like education, medical care, and infrastructure. The Alaska Native Claims Settlement Act, which helped settle land claims and spur economic development among indigenous Alaskan groups, could serve as a model.

No single product or project can save South Sudan, and nobody can turn a bad government into a good one.

It’s important not to lose sight of the possible spoilers: those who benefit from South Sudan’s prolonged misery. Some remedy must lie in the carrot-and-stick diplomacy behind the 2005 Comprehensive Peace Agreement and the 2011 referendum that produced the country’s independence.

No single product or project can save South Sudan, and nobody can turn a bad government into a good one. Some groups might even be happy with the status quo. But international partners can help what’s already good in South Sudan become even better by building on the existing social, economic, and democratic activities.

Over many generations this kind of approach could build a country the right way: enterprise by enterprise and community by community.

Christopher W. Douglas has a master’s of administration in diplomacy and international commerce from the Patterson School. He serves as managing director of the American 501(c)3 Lone Star—Africa Works, which connected the River Nile and Lulu Works cooperatives with their first American customers. This article was previously published on FPIF.org.